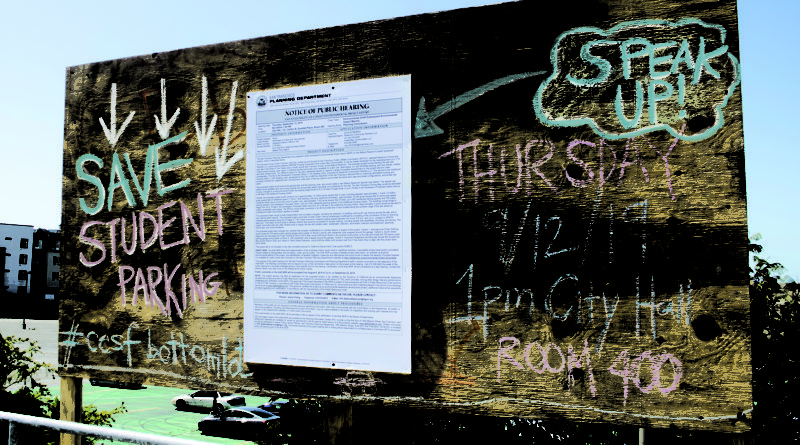 The Balboa Reservoir Project has prompted concerns of traffic congestion by City College staff, has challenged the city’s definition of affordable housing, and has fanned the flames of a larger debate about the privatization of public land.

The 17 acres of undeveloped land identified as the reservoir, are currently owned by the San Francisco Public Utilities Commission and have been used by City College for various reasons, including a student parking lot since 1946.

San Francisco voters have rejected three past propositions for the city to sell the land to private housing developers, most recently in 1991. The current Balboa Reservoir Project originated in November of 2014 as part of the Public Land for Housing Program under former San Francisco mayor, Ed Lee.

A development team was selected in 2017, including AvalonBay Communities and BRIDGE Housing with Mission Housing, Pacific Union Development Company, and Habitat for Humanity of Greater San Francisco to develop a housing plan to combat the city’s lack of affordable housing.

The parameters for the development, as it currently stands, include a total of 1,110 housing units. Of those units, 50 percent have been allocated as affordable housing.

“I think when this project was initially conceptualized it wasn’t even at 50 percent. Our office worked with the community members to push it to that level,” said Jen Low, a legislative aide to Supervisor Norman Yee who specializes in land use measures.

However, the 50 percent that is said to be set aside for affordable housing is actually much less.

BRIDGE Mission Housing will subsidize 18 percent of the rental apartments for residents earning a single income of up to 55 percent of the city’s Average Median Income (AMI), putting the annual income cap at roughly $60,000.

Another 15 percent will be subsidized by BRIDGE for residents earning a single income of up to roughly $105,000 or 120 percent of the city’s AMI.

“I believe they are negotiating an educator housing building that would potentially house faculty and educators from City College,” said Low.

Neither the Board of Supervisors, the developers, nor the Planning Commission have specified how many units that would be, but all three institutions have assured that some of the housing would be reserved for faculty, staff, and students.

The city will subsidize the remaining 17 percent for both income groups, comprised partially of an undisclosed number of for sale units capped at a single income that is 105 percent of the city’s AMI.

Traffic congestion of the surrounding streets, including but not limited to, Frida Kahlo Way and Ocean Avenue, also pose major concerns for those who are critics of the project.

“Supervisor Yee has been adamant about the issue around transportation mitigation, ensuring that we actually have transit access and congestion mitigation given the size and scale of the project. We already have a lot of issues, as it stands, with Frida Kahlo Way and some of the intersections near the project site. We’ve been very public about our concerns on the issue of traffic congestion and the impact it will have on our transit system, especially with the K line” said Low.

Since it’s initial stages, the development project has been linked to the Balboa Park Station Area Plan, an initiative launched in 2000 to better link the BART Station with the College and the Ocean Avenue Neighborhood Commercial District.

“One of the things that we want (the developers) to really evaluate is if we are going to address some of the traffic and transit concerns. They could be a good partner with City College in trying to have better way finding, to improve the transit connection to BART and MUNI. Those are still up in the air, you know, works in progress. From our understanding, the developer and City College have been in conversation about that,” Low continued.

The proposed housing development would also eliminate more than a thousand parking spaces located on the western edge of City College’s Ocean Campus. Parking is already at a premium on campus, as more than 50 percent of City College’s full time students are based at Ocean.

“Eliminating parking spaces seriously limits access to education,” said Daniel Halford, an ESL instructor at City College, in a public letter to the mayor and San Francisco’s Board of Supervisors.

Halford’s letter had 84 cosigners, including 71 faculty. Both he and Mueller submitted their letters during the window for public comment, which closed on Sept 23.

Faculty and students have also expressed concerns that the private development will interfere with the long-anticipated construction of the Performing Arts Education Center (PAEC).

“The latest revision of the PAEC construction plan has extensively downsized the education portion of the PAEC because it would remove too many parking spots! Sufficient parking is so crucial that it is actually endangering the award-winning design of a long-needed building,” Halford’s letter claims.

This could result in monetary setbacks for a project that has already cost City College $30 million.

San Francisco’s Board of Supervisors do not agree, however.

“From our understanding, from when we were being briefed from City College or the developers, I don’t believe that this development would preclude a performing arts center from being built,” said Low.

“We’ve seen plans in which a potential future performing arts center is somewhere on the plan, but that’s not our jurisdiction,” Low continued.

Low and Halford both emphasized the need for students and other community members to get involved and have their voices heard.

Through the collaboration between community activists and San Francisco’s city hall, the Balboa Reservoir Community Advisory Committee (CAC) was established to “ provide a community voice and function as a central clearinghouse for community input” according to San Francisco Planning.

“We developed this CAC process because of the fact that we weren’t really seeing a lot of conversations and discourse involving the neighbors from various communities, City College students and faculty, and the merchants as well, to really weigh in on what type of project they want to see and the types of community benefits they hope to achieve if any project is to be built here,” said Low.

Low emphasized that if the Balboa Reservoir Project does continue to move forward, the communities concerns must be heard and those involved in the process must be transparent.