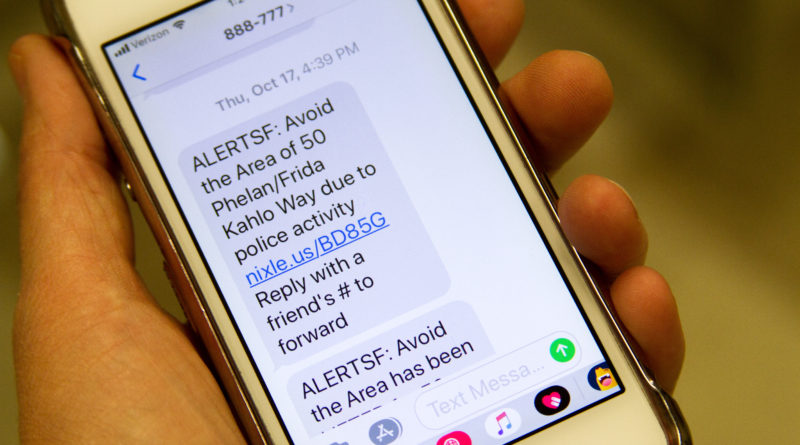 The bomb threat that prompted the evacuation of three buildings on Ocean campus on Oct. 17 was a false alarm, but raised questions over the emergency notification systems City College has in place.

The City College Police Department worked in tandem with the SFPD, SFFD, and SFMTA to evacuate the Multi-Use Building, Science Hall, and Creative Arts Building to search them with officers and bomb sniffing dogs. By 4:33 p.m. the sweep was complete and students and faculty  began trickling back into the buildings.

While no one was injured, concerns about the efficacy of communications with students and faculty in the event of a future emergency were triggered. Many students didn’t receive text message notifications alerting them to the threat.

“I wish it had been announced in all places. I never got a text message, and I have my phone number listed, it’s the only one I have. I wish [the emergency notification system] was better in terms of safety,” said Luana Melnek, a physics major. Melnek wasn’t on campus during the bomb threat, and didn’t find out until the next day through other students.

Tarik, an Electrical Engineering major who was evacuated from Science Hall during the bomb threat, also didn’t receive a text message. “I didn’t know about any procedures before our teacher telling us where to go,” said Tarik.

In the event of an active shooter or higher level threat, emergency notifications and procedures could be vital. During the recent outbreak of California wildfires, the office of student affairs sent an email out to students instructing them to update their Web4 profiles with a text message notification number, despite the fact that most students already had their cell phone contact listed as their primary phone number on the site.

This is an additional step that could be missed by students who don’t see the email, or have trouble completing the steps laid out in an attached PDF.

When asked why students are being required to upload a text notification number when there is already a primary number listed, a college spokesperson said:

“The college encourages all members of the CCSF community to confirm that their contact information in Web4 is accurate and up-to-date, and that all fields of the form profile are filled out. The College continually evaluates and adjusts its emergency response protocols to ensure it can communicate as effectively as possible during times of emergency.”

No further details on the bomb threat were shared by campus officials. “The incident, including the origin of the call, is currently under investigation,” the same college spokesperson said.

The Interim Chief of Police, Colleen Fatooh, could not be reached for comment.

If you haven’t already done so, please log into your Web4 profile, go to personal information, and add text message notification number so that you will be alerted in the case of future emergencies.