In response to the COVID-19 crisis, all restaurants in San Francisco have been ordered to cease dine-in service, and may only offer pickup or delivery. This is having a big effect on business because customers are what keep restaurants business open and running.

Sick leave is available to many restaurant workers. On March 16, Mayor London Breed announced a $10 million fund called the Workers and Families First Program, which is intended to provide businesses that need the financial ability to allow workers to take five additional days of paid leave. 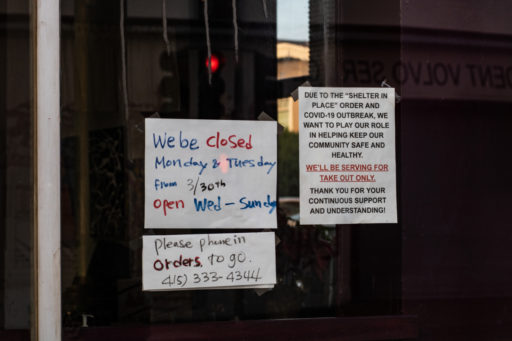 The mayor’s office has also given restaurants and bars other assistance such as deferral on taxes and licensing fees. The “resiliency fund” is giving out $10,000 emergency grants to small companies showing economic losses. Supervisor Hillary Ronen is also working on legislation to establish a $20 million fund that would be used to give small businesses interest-free loans up to $15,000.

However, many businesses are worried that these programs won’t be enough, so they’re asking the City to do even more, such as using surplus funds from Healthy San Francisco to cover lost wages for restaurant workers.

Although closing their doors has a big impact for bar and restaurants owners, they understood the necessity for public safety.

When Governor Gavin Newsom ordered bars to close in March, Ben Bleiman, owner of the Tonic bar in the Tenderloin, told ABC News, “I think it’s the right thing to do. The hope is that the measures we take now prevent things from being much worse later.”

According to an article in SF Eater, Clay Walker, the president of Gott’s Roadside, told the SF Business Times that the crisis might be the last straw in an already struggling industry. “There are a lot of San Francisco restaurants teetering anyway…I’m predicting mass closures. Not temporary closures.”