Community members are raising the alarm about the privatization of public land, transit and traffic conditions, and affordable housing at Balboa Reservoir. The City College Board of Trustees is preparing to vote May 28 on the highly controversial development of 1,100 housing units at the 17-acre site that currently serves as student parking at Ocean Campus. 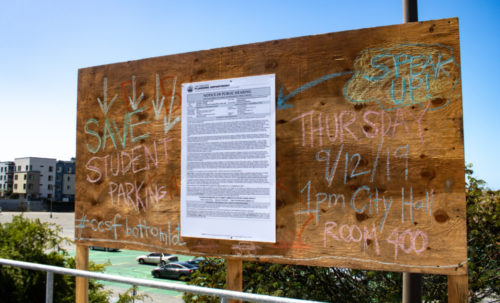 Mayor London Breed approved the newest iteration of The Balboa Reservoir Project on April 28, a major win for the development team made up of Bridge Housing, Mission Housing, and AvalonBay. The development would include a childcare center, a new public park, and transportation improvements.

Many at City College still object, and CCSF Collective has circulated a petition to, among other things,  preserve this parcel of public land for student and staff use. The land has been rented to the college by the Public Utilities Commission (PUC) since 1947.

Neighborhood resident Alvin Ja denounced the stipulation of the project that would rezone the land from Public to a Special Use District in an open letter to the Land Use & Transportation Committee, Board of Supervisors, Planning Commission, and PUC.

“The current [Public] zoning already allows for affordable housing; the only difference is that [Public] zoning would not allow for the market-rate units,” Ja said. “The public has no need to subsidize private developers with public property.”

Ja critiqued the developers’ plan further for disrupting The Balboa Park Station Area Plan (BPS) which was established in 2000 to revitalize the neighborhood economy and streamline public transit issues. The long-standing plan would have to be amended to accommodate the new development.

“Integrity would have required an early assessment of the Reservoir Project within the context of the higher program-level BPS Area Plan, not the other way around,” Ja said.

Capitalizing on a Crisis

“Instead of looking to expand programs that are essential to recovery for marginalized communities in the aftermath of this pandemic, Breed is helping wealthy real estate developers buy up public land,” Van Chung said. “Breed is hell-bent on helping developers capitalize on the pandemic.”

Van Chung further criticized city officials for taking advantage of the fact that stay at home orders have limited the community’s ability to participate in the decision making process.

“It’s particularly unfortunate that all this is proceeding in virtual meetings because it is so easy to lose track of legitimate issues,” music instructor Harry Bernstein said, citing closed door meetings between the developers and city officials that the college community were not privy to.

Breed’s Mayoral Proclamation of Local Emergency, Supplemental 8, issued April 1, limits the ability for public boards and commissions to meet except when there is “an urgent need to take action to ensure public health, safety, or essential operations” until May 3. Members of the Sunshine Ordinance Task Force have questioned whether the Planning Commission should even be meeting under the order, let alone pushing through a major deal like the Balboa Reservoir Project.

Cooperation From the College

In an official statement released by Breed’s office, Yee said the Balboa Reservoir Project “will serve as a model for what community-led planning can look like. We need a comprehensive approach to housing and I believe this proposal captures those principles.”

Music Department Chair Madeline Mueller, who has participated in past BRCAC meetings, was less enthusiastic. “It was totally clear that the transportation needs of City College, the current neighborhood, and even the totally bloated development will not be met and will not be mitigated,” she said.

City College Trustee John Rizzo also expressed disappointment that a lot of aspects of the initial proposal, such as 500 beds dedicated to students, are no longer being considered.

“They’re not working with the college as they said they would at one point. They’re leaning on us to do some things that we’d rather not do,” he said. “They want to move a city road to the middle of City College property.”

Furthermore, the current proposal will only replace a fifth of the lost City College parking. “They’ve left us with a long term problem that we don’t quite have an answer for,” Rizzo said.

“There is no doubt in our mind that we are committed to a project that is 50% affordable,” Bridge Housing Executive Vice President Brad Wilbin told The San Francisco Chronicle. “The city is holding our feet to the fire to make sure that is the case.”

However, Breed’s office defined affordable as a range from 30% to 120% of  the Area Median Income. Only 123 units are set aside for families making between $37,000 to $98,000 a year. Classified workers at City College would not be able to afford the proposed range.

Another 154 units have been earmarked as educator housing.

“Although the developers say they will try to put aside rental units for CCSF faculty and staff, they really cannot legally do so unless the land belongs to City College,” Music Department Chair Madeline Mueller said in an open letter to community organizers.

The other 50% will be market rate housing, and subject to the Bay Area’s exponentially rising prices. Some residents have raised concerns about the for-profit model of AvalonBay’s other holdings.

“Just because they won the contract does not necessarily mean that they deserve the right to acquire this irreplaceable public property, and very likely at a discount,” Bernstein said.

“We’ve not agreed to it at this point,” Rizzo said. “I think they’re just assuming that we’ll sign.”

The Board of Trustees will vote on the plan on May 28. Details about how to virtually attend the meeting will be posted on the Board website.