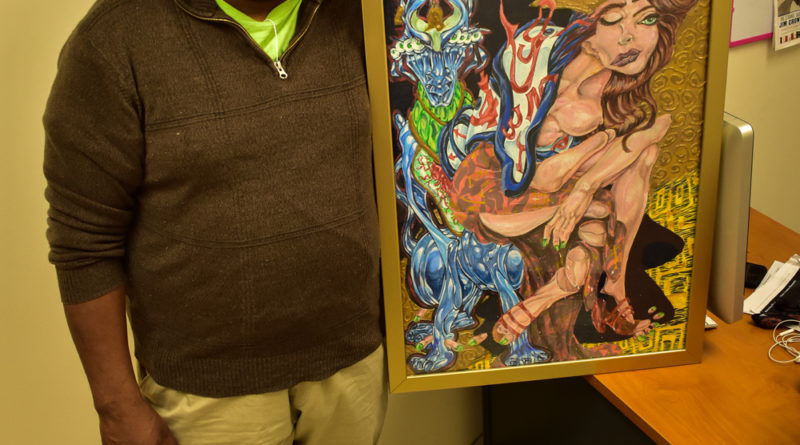 The exhibition hosted artists who created their work in protest against the college’s massive class cuts also known as the Midnight Massacre. “I wanted to show my audience all the classes which were being cut including classes from dance, guitar, metal arts, Chinese brush painting, Tagalog, German, journalism, and swimming” Greene said.

Greene, who applied to City College in 2000, is a continuing education student with a dream of becoming a cartoonist. However, his illustration class emphasizing in the illustration of live models, was cut before he could retake the course.

“My art professor, Inna Razumova only had one semester with the class,” Greene said. “It was a perfect class for artists to learn how to transition between illustration and the practical elements of learning the techniques.”

He furthered explained how students, especially older adults, are dependent on their coursework because it grants them a new lease in life. “They come back a little stronger when they are a little older, which is one of the reasons why I was so upset with these class cuts,” Greene said. “When they get to be about 50 to 55 years old, they start thinking how they have done all the things they were supposed to do for other people. Now, it is supposed to be their time.”

In addition to loaning his illustration to Art Action, he donated three of his art pieces to CCSF Collective, an art-activism organization, during their show titled “Crescendo.” However, Greene’s success in becoming a cartoonist came with a set of challenges and setbacks. During his childhood he grew up in a single family household in Hampton, VA.

“We were known as the poor family in the neighborhood. So you know, that opens the door for a whole lot of bullying.” Greene said. “The owner’s rented us a garage, which is another signification that we were not of means. So it was the four kids, my mom, and her boyfriend.”

Greene was extremely shy due to being bullied. In order to overcome this obstacle, he found recognition from his peers through his illustration which then propelled his fascination in the arts. After high school, he was accepted into Virginia Commonwealth University of Arts (VCUA) on an undergraduate degree in 1983.

“I wanted to apply next Spring because I was so nervous about setting off into a whole new world, but there I was with all my belongings packed,” Green said. “When I started college, it was an eye opener, it was hard, but there was growth. I had to deal with people, who culturally I never had to deal with before. In addition, you had to stand up for yourself in ways you didn’t know how,” Greene said.

Eventually, Greene left VCUA and Virginia to focus on becoming a full-time cartoonist and chef. However, his career as a chef would overshadow his dream in becoming an artist.

“Once you start working, it can be a dream killer. I tell people, especially young people, to follow your dream no matter how crazy it is. To get a job in the industry where you want to be in. Even if that means washing or sweeping the floors.” Greene said.

In 1999, he moved to San Francisco to escape a broken heart. The nomadic artist eventually settled amongst the richness of art the city had to offer. Eventually he would apply to City College in his later years to further his education in jumpstarting his entrepreneurial career. His dream is to one day own a manga company, “Aziza Manga”, named after an African forest god.

Greene closed his interview with a message to the City College administration. He said, “Cutting classes at a time where the United States needs as much innovative thought as we can to remain a power player and to not become a fractionalizes sectionalizes class system. This is something you need to really think about, and the short term leadership does not benefit our long term gain.”