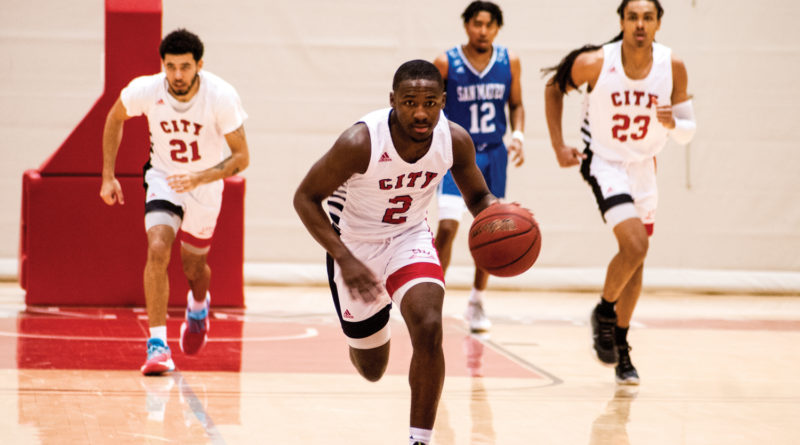 The undefeated Rams throttled an overmatched San Mateo Bulldogs team on Wednesday, Oct. 15 to improve to 17-0.

After a sluggish start, City College began pulling away midway through the first half, stifling San Mateo with an aggressive press and putting up lots of points in transition.

“We started off a little slow. We’re the number one team in the state, and we’re always gonna get everyone’s best game,” Rams Head Coach Justin Labagh said.

Despite stumbling out of the gate, City College was obviously the bigger, stronger, more athletic team and knew that a dominant victory was inevitable.

Miles Norris, a 6’10” sophomore who transferred to City College from University of Oregon to avoid sitting out a year as he would’ve had he transferred to another NCAA school, was literally head and shoulders taller than any San Mateo player guarding him.

The highlight of the game was a two-handed poster jam that Norris stuffed on Bulldog freshman Irnes Sarvan after driving baseline.

“It’s always good to get a nice dunk,” Norris said. “I try to get one at least every game.”

Norris is bound for UC Santa Barbara next year and wants to have a strong return to the Division One (D-I) level. His goal is to excel at Santa Barbara before entering the NBA draft and beginning a professional career.

Several other Rams have scholarship offers from D-I schools. Sophomore guard Nate Robinson is going to play at Seattle University next year and may be joined there by teammate Emeka Udenyi. Sophomore Quincy Urbina is signed to play at Grand Canyon University, meanwhile, other players are fielding offers.

Freshman guard Kyree Brown excelled throughout the game from behind the arc striping seven triples and finishing the game with 29 points to leave all scorers.

The game got chippy briefly in the second half when Bulldog Oscar Pedzara after falling down intentionally tripped Urbana and injured him.

“It was a real cheap play,” Labagh said. “The ref, he didn’t wanna call it for some reason.”

Labagh commended the Bulldogs Head Coach Mike Marcial for benching Pedzara for the rest of the game after seeing the dirty play.

Although he declined to comment after the game, Labagh was loud and vocal on the sideline about his frustration with a particular referee, whom he felt was missing calls.

When asked if he thinks this team can finish the season undefeated Labagh said, “That’s the plan.”

He said that this team is up there among the best in program history.

“We’re ten deep and they’re all skilled. They all could start,” Labagh said. “They’re right up there. They’re really dominant and their smart.”

The Rams followed up the Bulldog trouncing with another annihilation Friday, Jan. 17, whooping the Foothill College Owls 73-41.

The Rams take on the Cañada College Colts at home Wednesday night. For a full list of their schedule over the next two weeks reference the sports calendar.