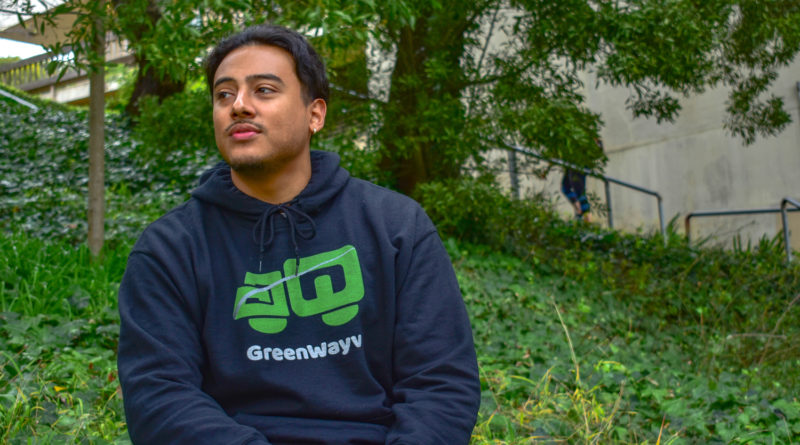 The Center for Entrepreneurship and Innovations (CEI), one of City College’s newest programs continues to produce blossoming entrepreneurs such as Kevin Posadas, 24, owner of GreenWayv LLC.
GreenWayv LLC, is an eco-friendly company which caters to the northern peninsula and provides at-home pickup for reimbursable recyclable materials.

Posadas established his company last October with co-founder, Mark Bandalan, 24, to combat the flow of pollution entering our waterways by providing customers with a 50 gallon eco-friendly corrugated cardboard bin made to store their recyclables. Posadas described the process as, “We sell our bins for $30 and in those bins you compile your plastics, CRV bottles, and aluminum cans. You can request a pickup once your bin is full and we will arrive the next day to your door.”

GreenWayv LLC, is located in San Francisco and serves approximately 50 homes in the Bay Area including South San Francisco, San Bruno, Daly City, Colma, and Pacifica. Currently the company is working on a beta test with Westmoor High School, in Daly City, and is in the process of obtaining a 300 unit complex by Skyline College.

“One of our biggest agendas we do is to tell people exactly what they’re recycling and how much of an impact they are having on the world,” Posadas said. “We pick up their recycling and we tell them how much money they had made. Also, we give stats on how many pounds of waste they are diverting from our oceans and natural environment. Stats such as, ‘Recycling 60 pounds is equivalent to removing one cubic foot from the Great Pacific Garbage Patch.’”

The garbage patch is nearly the size of Texas, compiled of marine debris and is currently polluting the North Pacific Ocean. Most of the debris found in the patch is non-biodegradable plastic and often disintegrates into microplastics. National Geographic described how marine debris can prevent the growth of algae and plankton from receiving sufficient sunlight in the creation of vital nutrients for marine life, which in turn threatens the entire oceanic food web.

In addition to preserving the ocean habitats, Posadas strives to help communities within the Excelsior District in achieving the goals of being environmentally conscious. Posadas said, “We need to allow for all different types of people from all different types of backgrounds to be able to take advantage of recycling and its values. There is a large community in Excelsior district, who does not have access to a recycling center within their radius. The closest one is in Bayview. However, since we’re mobile we can facilitate for anyone no matter how far they are from a recycling center.”

In Jan. 2018, China passed the Chinese National Sword policy, which banned the import of solid waste, raw materials, plastic, and paper amounting to half of the world’s recyclable waste.

China processes 55 percent of the world’s scrap paper and is the leading destination for other recyclable materials, so the restriction is already having a major impact on global waste management. Already the amount of scrap plastic imported into China has fallen from 3.5 million metric tons in 2017 to just 21,300 metric tons so far this year, according to a 2019 statement made by China’s Ministry of Environmental Protection and the China Scrap Plastics Association.

Posadas pollinated his dream of becoming a business student and environmental entrepreneur by applying to City College in the Fall of 2018, after leaving his prior profession as a real estate agent despite the uncertainties of the global economics regarding recycling.

“Being a realtor wasn’t fulfilling enough for my soul. I felt like sort of a ‘douchey’ salesman at time and I didn’t want that to be my end goal in life. The reason I came to City College was because I thought that there would be resources here to help me with my start-up, which was an absolute right thing to do. I wouldn’t be where I am without having come to City College and applying to CEI, that’s 100 percent,” Posadas said.

CEI was implemented in 2019, by Professor and Business Instructor, Vivian Faustino-Pulliam. CEI is described on City College’s website as, “a college-wide incubator of disruptive ideas that students bring to life from concept development to market testing all the way to impact. The CEI harnesses the collaborative spirit of various centers and academic departments within the college and community partners in providing access to critical resources and to network with entrepreneurial community in San Francisco and the Bay Area.”

With the help from Faustino-Pulliam, Posadas was able to execute two pitches for GreenWayv LLC, which won him multiple awards ranging from “most purposeful” to being placed as top five in the North American Community College Entrepreneurship (NACCE), a foundation focusing on the expansion of entrepreneurship programs throughout community colleges in the United States.

In addition, Posadas was recognized by Shark Tanks co-producer, Raymond Panetta at NACCE. “He has seen thousands of pitches and his reaction to mine was, ‘Wow, that’s all I can say is wow,” Posadas said.

Posadas attributed his success to Faustino-Pulliam and described her as an amazing person, who opens her doors to anyone and works overtime for her student’s success. He also thanked his family for being supportive throughout his journey with GreenWayv LLC.

However, the reenactment of CEI lies in the hands of the administration. Posadas said, “it is in the air, I believe, but I think that City College has big plans. I was able to meet with the Dean of Business and they want to expand CEI. For instance, right now they’re giving ‘Certificates of Accomplishments’ to people, who have been incarcerated. So City College is reaching out to inmates in different jails around the San Mateo County. There is so much positive things being built around CEI, and I can only hope that they continue to be around for a while.”

Posadas goal for his company is to expand the companies demographics from local neighborhoods, to nationally, then globally. When asked where he visions himself in ten years time, he responded, ‘to just be happy.’