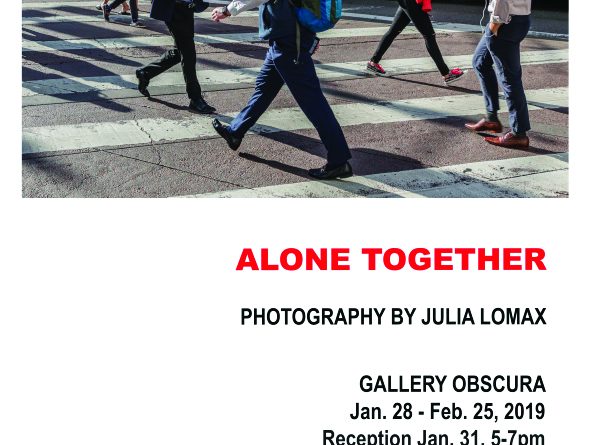 Alone Together, the latest exhibit at Gallery Obscura by street photographer and Cherkis scholarship winner, Julia Lomax, explores ideas of public privacy by showcasing different ways people ignore each other while still subconsciously mirroring one another physically.

The people pictured in these photographs are oblivious. They look at their phones, they sit in a park, they cross the street, all without acknowledging one another, despite the fact that their body language and expressions are nearly identical.

In her artist’s statement, Lomax wrote that she is “drawn to the strange symmetry, and irony, of how people mirror each other’s movements and postures, like a kind of choreography, while simultaneously ignoring each other.” 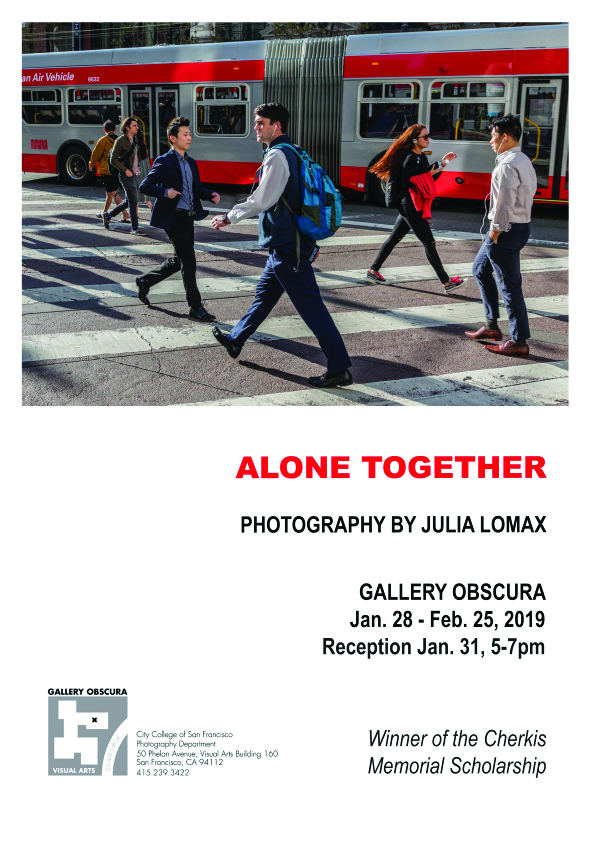 Each individual in these photos is acting independently, but the way they are photographed heightens the sense that each group of these individuals are a perfect set. They are connect by their location, activity, body language, and expression.

While working on a project documenting Chinatown, Lomax took a photo she ended up titling “Alone Together” and including it in the exhibit. It became the “seed” for the show.

“I knew there was more to it,” Lomax said. “And I had observed [this phenomenon] all over the place. A lot people say that they see it and it bothers them too.”

This dynamic bothers Lomax because she says she can remember how people behaved before phones made it easy for people to “check out” from their surroundings.

“There were way more opportunities to interact because you would be bored and looking around,” Lomax said.

“There’s a way that people space themselves out to be comfortable, to respect each other’s private space. It’s not always a bad thing,” Lomax allowed, but said that the problem, especially in urban environments is that “we can do that so much that we don’t actually interact with anybody in a whole day.”

Lomax says the way people maintain their personal space can be interesting to photograph because it creates patterns that make dynamic compositions.

In order to capture these moments, Lomax sought out areas that had higher concentrations of people. She also considered the time of day, both for lighting and shadows, and for the fact that people behave and move differently depending on where they need to be and how quickly they need to be there.

Lomax developed Alone Together as her final project for Steven Raskin’s Intermediate Photography class before submitting it for scholarship.

Alone Together will be on display at Galley Obscura in the Ocean campus photography department from Jan 28 to Feb 25.