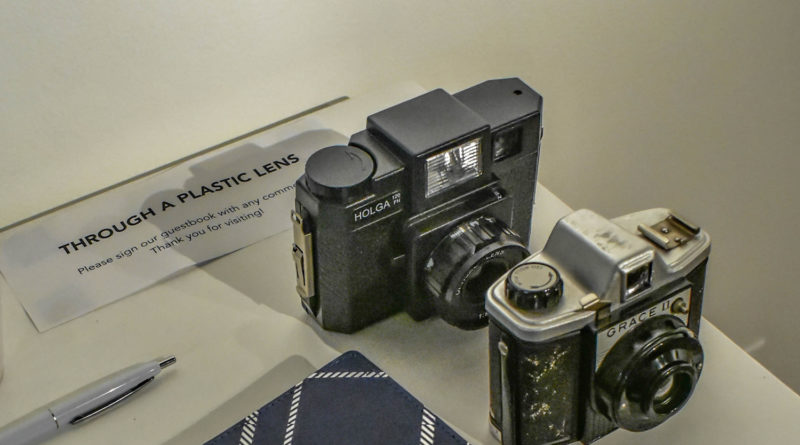 By Rachel Berning and Jennifer Yin

According to their website, “Gallery Obscura is an exhibition space committed to showcasing outstanding student work. Situated in the heart of the photography facility, exhibitions rotate throughout the semester. The gallery also features work by the recipients of the various awards and scholarships that are available to CCSF photography students.”

City College 2019 alumni, Kevin Zhou’s photography incorporated images of the San Francisco’s Lesbian and Gay Freedom Band and a double-exposed image of an LGBTQ+ flag overlapping a Folsom St. flag. Zhou printed his photography on metallic paper, which increases saturation and provides an extra clear layer on the paper.

Joseph Untalan, a City College continuing student of more than 10 years said, “I didn’t submit these at first because I didn’t think they were good enough, but Williamson encouraged me, and here we are.”

Williamson’s plastic camera class was instated in the Fall of 2019 with the help of Chair of the Photography Dept. Erika Gentry. “She worked her magic in getting this class instated. I don’t know how she did it, especially regarding all the cuts made to our department,” Williamson said.

According to the City College’s website, “students learned (in Williamson plastic lens class) the differences between various models of plastic cameras and how to modify the cameras for optimum results.” In addition, Williamson taught her students how to pay attention to motion within their camera and how the art of photography has the power to change lives.

However, some students had a few challenges while talking Williamson’s class including finding time to squeeze their work within a six week period and experimenting with new techniques such as double exposure. Double exposure is when a photographer shoots two frames simultaneously resulting in two projected images on one photo.

“Everyone in the class wanted the course to be longer than six weeks,” said Williamson.

Williamson has been teaching at City College since 1996 and has been working with toy cameras for a number of years. Toy cameras, or pinhole cameras originated in China and was made popular in the 1960s by poor Chinese workers. The cameras are known for its traits in creating a soft focus, soft edges, vignetting, blurring, and having a dream like quality in its photos.

“Plastic Cameras is another name for toy cameras. The camera only has a few simple manual controls such as one shutter speed, and two apertures. However, it takes a rather large film, 120mm to be exact. Also, the two main companies, who manufactured toy cameras was Holga and Diana.” Williamson said.

In addition to her show at Gallery Obscura, Williamson has a yearly show titled, “Krappy Kamera” in Soho, N.Y. “I used to be downtown with a plaster camera. I would show every year and some of my work has gotten entries from all around the world,” Williamson said.

For more information regarding, “Through a Plastic Lens,” visit https://ccsfphoto.wordpress.com.