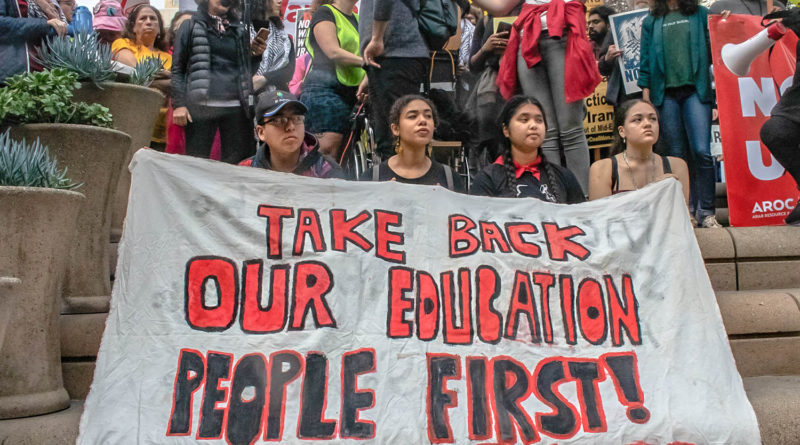 City College students were among hundreds of activists who marched down the streets of San Francisco Jan. 25 to protest the U.S. government’s assassination of Maj. Gen. Qassem Soleimani, an Iranian commander of the Quds Forces.

On Jan. 3, President Donald Trump ordered a drone airstrike killing Soleimani and nine others at the Baghdad Airport in Iraq just three days after the new year.

“The assassination seemed liked an overreach seeing how the Iraqi parliament immediately voted to kick the United States out right after, which lets you know we did not have the insight and the support of our partners in the region to go ahead and order the attack,” Student Trustee Bryan Daley said. “The U.S. needs to stop moving unilaterally and bring coalitions together to get things done. We also need to be working in respects with the Iraqi people and doing essentially as they wish to liberate their land.”

Solidarity Between Iraqis and Americans

Protestors from all walks of life chanted, “Move Trump, get out of the way, get out of the way,” while holding signs which read, “South Asians against the war,” and, “the war economy is immoral.” In addition, Act Now to Stop War and End Racism (ANSWER) Coalition’s sign read, “Trump, the people say no war on Iran! U.S. troops out of Iraq.”

The march ended at the edge of Union Square, while dozens of SFPD officers surveyed the crowd in front of the Macy’s storefront. Afternoon shoppers took to the windows to gaze from afar at the accumulating crowd, while speakers ascended towards the center to deliver their speeches.

Rosa Pergams, from The Party for Socialism and Liberation said, “This is a war against oppressed and exploited people all over the world. We must fight to smash capitalism and end imperialism. We and the Iraqis demand the U.S. out of Iraq now with no more war or sanctions on Iran. We have the power and responsibility to stop the war machines.”

The airstrike was due to a complex history of tensions in the region, including what anti-war protestors consider to be an occupation of various countries in the Middle East by the U.S. military.

President Donald Trump’s 2018 decision to pull out of the Iran nuclear deal and to implement economic sanctions against the country prompted Iran to exceed the deal’s defined limits. Two years of minor escalations lead up to the Dec. 27, 2019 attack on an Iraqi military base which killed a U.S. contractor, an attack which U.S. officials blamed Kataib Hezbollah, an Iran-backed militia.

In response, the U.S. government ordered airstrikes on Kataib Hezbollah sites in Iraq and Syria, which killed at least 25 people, according to a statement by militant group Hashd al-Shaabi. This action prompted Iraqi citizens to storm the U.S. Embassy in Iraq, responding to what they viewed as an invasion of Iraq’s sovereignty.

A Conclusion to the Escalation?

The US House of Representatives voted Jan. 30 to repeal the 2002 Iraq Authorization for Use of Military Force (AUMF), which was used as legal justification for Soleimani’s assassination. The legislation was sponsored by Rep. Barbara Lee, D-Oakland, who has long been opposed the “war on terror.”

In a Twitter post, Lee said, “The 2002 AUMF is not needed for any current counterterrorism operations. PERIOD. This outdated and unnecessary AUMF has been on the books for far too long. It’s past time for Congress to reclaim our constitutional authority on war and peace.”

Kyi said, “What is prioritized more? Education for the public or is it militarization of the communities? City College at the local level plays a huge role in the anti-war movement. Our generation today is organizing on City College’s campus at the resource center. Whether or not you are a faculty member or student, we all have a role to play in prioritizing education and not militarization.”