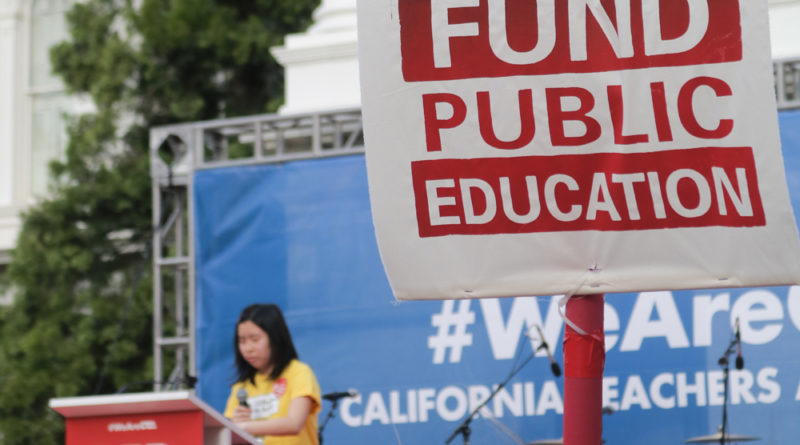 City College’s fiscal troubles arise from numerous sources, but one of the most important is a new funding formula approved in 2018, which applies to all community colleges in California.

Under the new plan, called the Student Centered Funding Formula, a portion of the funding provided to each community college is based on the number of low-income students enrolled, while another portion is based on student success, which is defined as factors like degree and certificate completion.

The bulk of state funding is still based on simply the number of full-time students enrolled. However, the percentage allocated for degrees and certificates has raised concerns among some faculty members.

In a panel discussion held on Dec. 8, 2019, viewable on the “laborvideo” YouTube channel, three City College faculty members discussed the impact of the formula, which they see as part of a larger movement to “corporatize” or privatize the state’s community colleges.

Edgar Torres, chair of the Latin American and Latino Studies Department, said that when the college is deciding which classes to cut, they now tend to make decisions based on which ones will bring in the most money, rather than which lead to the most successful educational outcomes. This is what happens, Torres said, when the state of California tries to “impose a template that fits all of the community colleges the same way,” rather than letting each one reflect the unique community it’s a part of.

Political Science instructor Rick Baum noted that City College is unusual in that it offers a wide range of courses, rather than just introductory classes intended for students planning on transferring to a four-year school. The new formula is designed for the type of student who “attends for two years, full time, and gets in and out of the college right away.”

In the same panel, Biology Professor Simon Hanson said that lobbying efforts had been successful in adjusting the funding formula. Previously, 20% of the funding was based on success metrics such as graduation rates, but that changed to 10% and could even be adjusted further in the coming years. He also noted that City College was in a “hold harmless” status, meaning the new formula was not being applied yet. However, that status is temporary, so the amount of money City College gets from the state will likely drop significantly within about two years.

Because of that projected loss of revenue, City College leaders are seeking additional funding sources, at both the local and state levels. The Community Higher Education Fund, planned for the November 2020 ballot in San Francisco, is being driven by Supervisor Gordon Mar’s office. At the state level, the Schools and Communities First Initiative, also planned for this November, is supported by both AFT 2121 and the City College Board of Trustees.

In an op-ed for The SF Examiner, long-time faculty member Leslie Simon urged voters to approve both measures in order to support City College, to compensate for the new formula being “unfriendly to large urban districts.” She reminded readers that City College “has never lost an election,” a nod to prior successful initiatives such as Free City in 2016, and two facilities bond measures passed in the last 20 years.