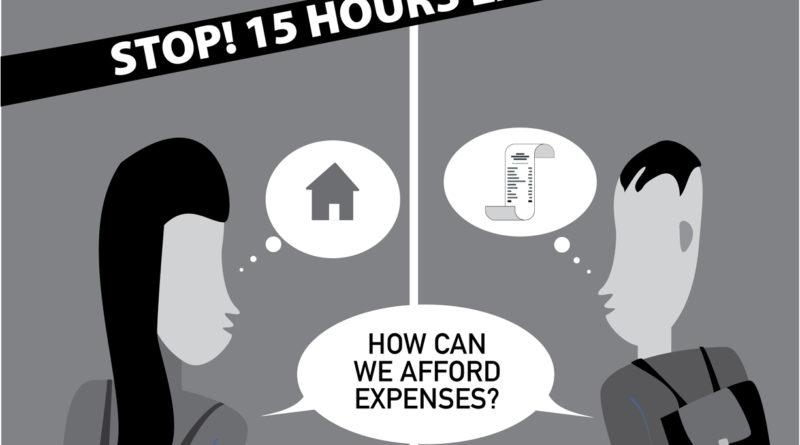 Student-workers at City College continue to struggle to get the hours they want, and to find jobs that are suitable for their schedules.

The main reason behind this issue is the limited budget that City College offers for all of the departments hiring lab aides. Many of the employers on campus only have limited space and hours for lab aides to select from. In total, students are only allowed to work 15 hours. At approximately $15 per hour, student workers earn $900 or less from their on-campus jobs, every month.

Many lab aide workers, such as Pauline Maninang, a tutor at the math lab, desire more hours and pay for their work.

“Yes, I wish to get paid more, as well as be able to work more hours. Like any other student worker in CCSF, our hard work impacts more people than many would think,” Maninang said. “Even though we are only students, we also have families to help support. Some of us are unable to receive jobs from other organizations because of their inflexible schedules towards college students.”

Other lab aide workers, such as Nadine Peralta, who has worked as a secretary for the Associated Student Council, even found it difficult to find a lab aide job on campus.

“I think that the lack of advertisement and poor marketing is a huge problem at City. I needed to network and conduct intensive research to find jobs that were available to someone with such limited experience,” Peralta said.

This issue not only impacts lab aides, but federal work study (FWS) students as well. Jowi Aizpuru, who has a FWS position in the math lab, still found it difficult to find a position on campus because of the limited amount of hours offered.

“It was a bit tough especially since there was a lot of competition and I was unaware of how anything worked at City. I applied for the IT department before, but I was against five different applicants. But thankfully I was referred to by a friend and was able to land a job. Being federal work study also helped tremendously because many offices will be able to accept you,” Aizpuru said.

Competition does not only exist with lab aide candidates, but for many departments. Math Lab Coordinator Charles Hutchins explained why many students may choose an administrative job rather than tutor jobs.

“It looks like there is competition to find jobs because I get a lot more students coming in looking for jobs than I can offer positions to. A lot of times I would send them to the [Learning Assistance Center] because they also hire math tutors over there. It does seem like a lot of students out there especially for administrative jobs,” Hutchins said.

According to Nanette Moafanua, coordinator for student employment, the number of lab aide positions has been steady in recent years. In addition, she said improvements were in progress to make it easier for students to access on-campus jobs.

“Right now the number is pretty consistent surprisingly. Last time I glanced at it, we were at about 600 students hired total. For student workers, the benefits would be paid sick leave and that would be it. There was a bill that was passed and you would have to be employed for about 90 days, and then you would be able to use your paid sick leave. We’re just trying to improve the way students apply for jobs and how the process works.” Moafanua said.

Students at other California Community Colleges have faced similar challenges, such as a reduction of hours and fewer positions. At Diablo Valley College, many of the students were able to work 20 to 30 hours a week. However, due to a decline in the budget, many of their hours were cut by 10 hours.