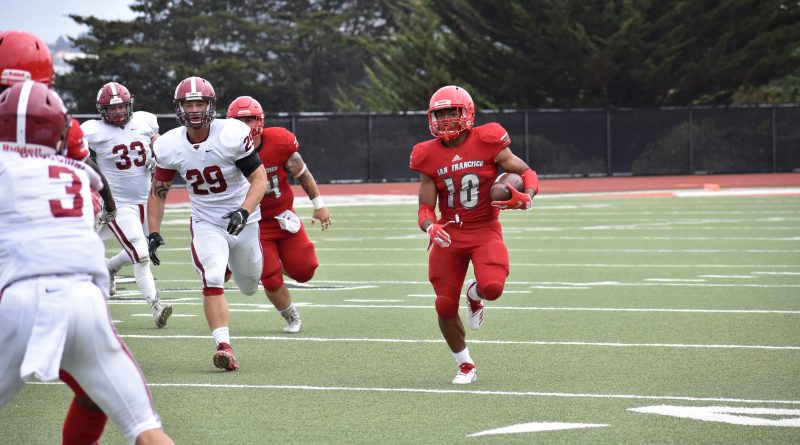 DesHawn collins waited an entire year for this moment. Down 6-0 against Sierra to start the game, sophomore Collins got the ball and burst past defenders to score a 60-yard rushing touchdown, putting the Rams up 7-6 after they hit the extra point. For the rest of the game the Rams dominated, ultimately winning it 56-13.

“It felt good. I was just ready to go,” DeShawn Collins said. “Sitting a year out helped me, I turned from a boy into a man.”

DeShawn Collins was certainly the man that afternoon, finishing the game with 115 rushing yards on 14 attempts with three touchdowns on the ground. During the game Collins showed off his versatility, tearing through the Sierra defense to rip off big runs, while also being able to run between the tackles, and even highlighting his pass blocking abilities when he picked up blitzing linebackers to protect quarterback Jack Newman.

Collins missed all of the 2017 season with an injury he sustained in the opening game. In his absence, back up running back Isaiah Floyd thrived, rushing for 1797 yards,

a City College record and earned himself a scholarship to Arizona State. Head coach Jimmy Collins was ecstatic to finally have Collins healthy.

“It was just a matter of time,” coach Collins said. “He is a special, special player.”

Besides DeShawn Collins, other Rams had stellar games. Newman, playing in his first college game ever, looked cool under pressure. Newman was 17-for-23 passing for 246 yards with three touchdown passes.

“Jack was fantastic in the pocket,” coach Collins said. “He had great poise, and was as accurate for a first start for a college quarterback that you will ever see.”

Sophomore wide receiver Frank Hall led the team with 70-yard receiving on 6 catches with two touchdown receptions. Hall runs precise routes, and with his quickness he is able to overcome the fact that he is short. All afternoon Hall found himself wide open, and on his second touchdown catch of the day, a 27 yard catch from Newman, Hall had burned his way past the defenders.

“You guys faced adversity,” coach Collins said to players in the locker room after the game. “It was 6-0, but we came back and got our first comeback game of the year baby. It is so easy when you guys play hard.”