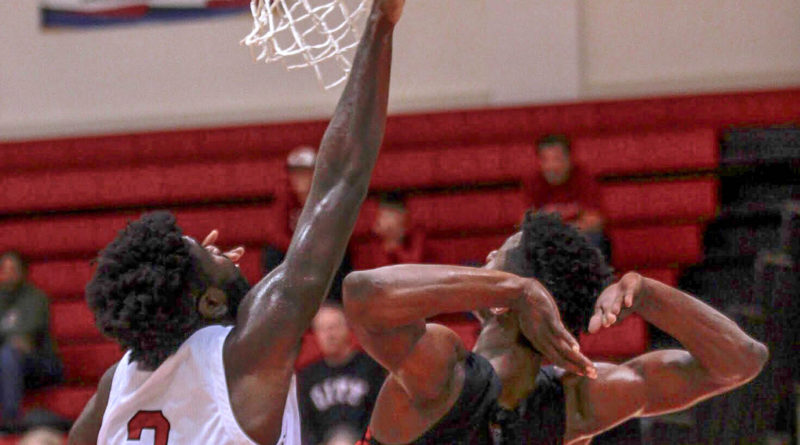 The second place Hawks gave the Rams all they could handle early on, and were up eight midway through the first half.  Star sophomore guard Michael Hayes scored 23 points that half for Las Positas and was able to consistently finish at the rim and get to the line.

The Rams typical world-beating swagger quickly morphed into gritty smash-mouth intensity. Towels were frequently brought out to dry the floor of sweat from recently spilled bodies.

The Hawk bench shouted and jeered from behind sophomore guard Dale Curry in an attempt to throw him off while he shot a corner three. After Curry cooly bottomed the triple, he held up a three-point symbol to the bench in celebration and was assessed a technical foul for taunting.

With the score tied at 36 City College went on a two minute run to close the opening half 48-37, creating turnovers that led to easy points in transition. During this period came an unreal highlight, a soul-snatching poster dunk from Ram Miles Norris over Michael Moore, that left the gym in awe.

After a few half-time adjustments, the Rams never looked back, and what had been a back-and-forth fist fight of a game turned into a blowout.

While the second half provided less drama, Head Coach Justin Labagh was happy that the team was able to succeed in leveraging half-time adjustments into dominant performance.

He was proud of the toughness they showed versus their best conference opponent so far.

“We haven’t been down 10 all year long, this was the closest I think we’ve been at halftime,” he said. “It was all about making those halftime adjustments… We said if you do X, Y and Z a ten point lead will become 30 really quick, and that’s what happened.

Despite two Rams fouling out, the extremely deep roster didn’t miss a beat, and the team saw out a 110-74 finish.

“We’re trying not to leave anything to chance,” Labagh said when asked about going undefeated.

Their next game is away at Skyline on Wednesday, Feb. 5.