Death, Love and Pain-bodies is a new exhibition at the City College Art Gallery that combines the work of artists Abby Rocha and Michelle Chan, as known as EKKE, on view until February 13. 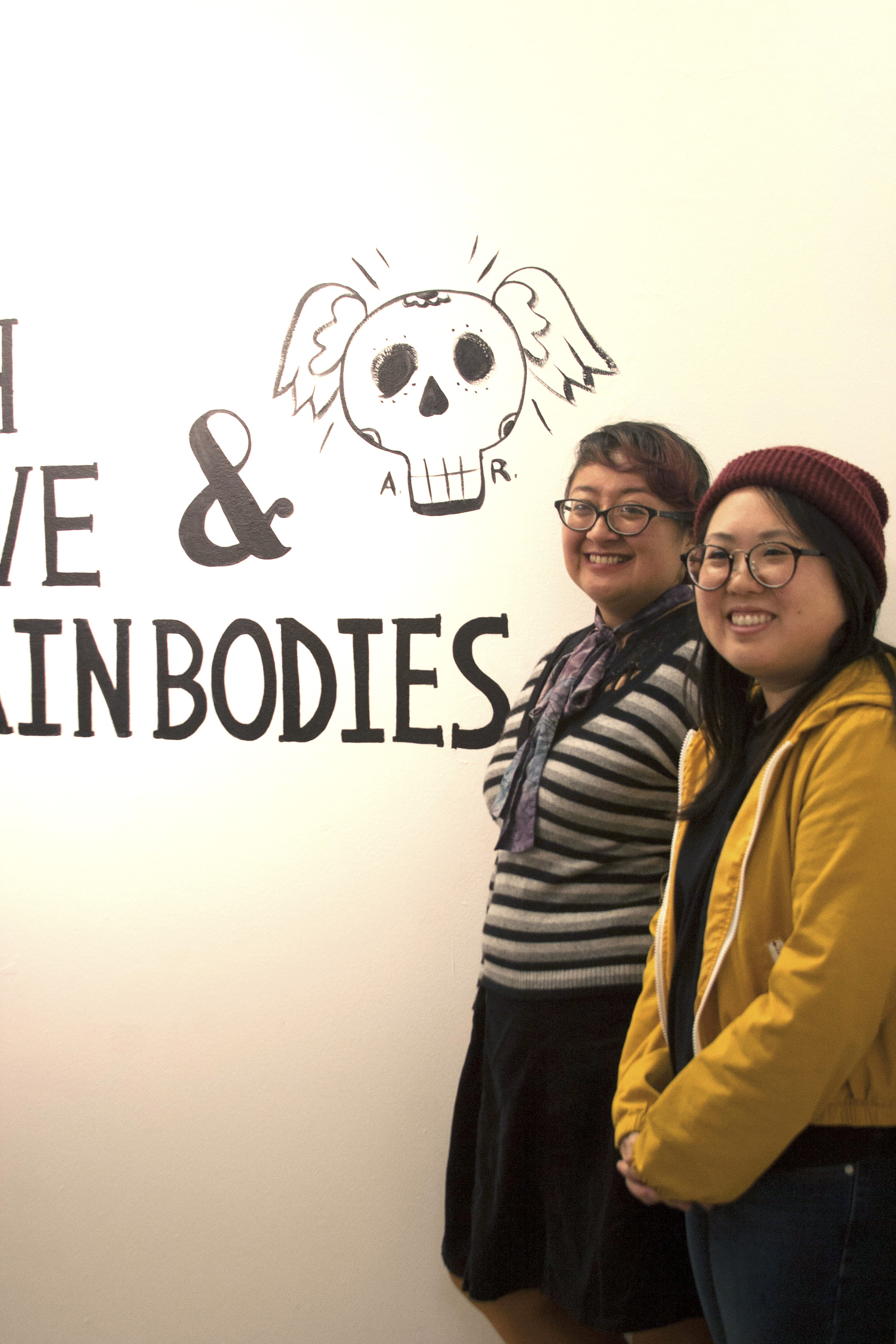 Both artists explore the relationship between trauma and compassion. Chan’s graffiti artwork does this directly by spreading joy and positive creative energy as a ward against the world’s pain. Rocha’s work, on the other hand, approaches the topic of grief in a way that isn’t as “death-phobic” as the predominant American culture and is inspired by her Mexican heritage, the death-positivity movement and the Victorian mourning rituals.

The “pain-body” is a concept that comes from Eckhart Tolle, a spiritual teacher. Chan explained it in this way: “It’s about how when you have a bit of stress or trauma, it kinda stays within you and it carries on generationally until you address it yourself.”

This kind of negative emotion can be passed down so there is also a human pain-body containing the collective suffering of human beings that is then carried by subsequent generations.

Nancy Elliott is a professor in the art department and a coordinator for the City College Art Gallery. Elliot originally connected with the two artist in order to get them to create a mural for the Oakland Animal Services’ animal shelter. She then reached out to them about doing a gallery show at City College.

When Chan and Rocha came together before the show, they found that their work was connected in a way that related to bodies, intergenerational trauma and the concept of love and death

“Abby does it directly in her painting and subject matter. It’s right there in the imagery.” Elliott said. “But with Michelle, it’s not in her imagery, but it’s kind of part of her reason for making art.”

“I’ve been exploring the theme of death as a memento mori to remember to live, to love, to sort of embrace what you have now,” she said.

Chan is a graffiti artist whose work features funky, round animals, bright colors, and pill-shaped robots with mechanical tentacles.

“Personally, I create art because of those past pain-bodies,” Chan explained. “I create really whimsical, fun stuff to look at instead, so it kind of recycles that negative energy into positive ones.”

At the Thursday night reception, Chan and Rocha met with students to talk about their work and their experiences as artists.

Elliot explained that she likes doing receptions for the art gallery around 5:30 p.m. to 7:30 p.m. so that students can filter in either with their classes or during breaks and interact with the artists. A figure drawing class and a ceramics class visited the space, and many more visitors came by in between.

Students wanted to know things like how to get work creating murals (the answer: to put yourself out there and say yes to every opportunity), how experiences from their old day jobs inspired their work, the differences between making street art in San Francisco from making street art in Oakland, to more specific questions like how Chan created the detail linework on her murals.

Elliot felt that both artists were very similar to many City College art students. They both came to their art careers after pursuing other degrees and working in other fields. Rocha studied art for 10 years at a community college and Chan has a job in the tech field.

“Both these artists are at an interesting place in their careers,” Elliott said. “And to me that’s really interesting because this is what our students are going to do after they leave City College in a year, two years, three years, four years… So Abby and Michelle are at that point, they’re not where our students are 20 years after they leave City College.”

#BerniceBing Is A Vital Figure of the #BayArea Counter Culture Canon https://t.co/XqUi8LPznm Written by:… https://t.co/YZfFYUufmQ