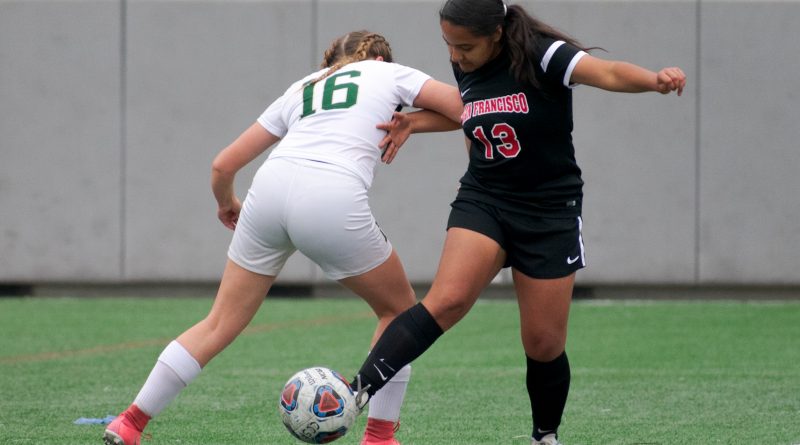 The Rams women’s Soccer team continues to dominant with a 2-0 win over conference opponent Ohlone, scoring two goals in the second half on Sept.21 to push their win streak to three games outscoring their opponents 15-0 during the win streak.

City College’s explosive offense was held to a scoreless first half although opportunities were there for them.

Minutes into the second half the Rams were on the scoreboard for the first time of the day. Captain Ileana Mercado set up Michelle Perez for the first score of the game.

“ Ileana has been a standout players all season for us. Today was no different, she created chances for us, leading to the first goal of the game.” Coach Jeff Wilson said.

Forward Shaylah Youngsdale added a late goal from a beautiful set piece from a free kick from Lauren Inman to help secure the victory.

The team played dominant together, especially on the defensive end allowing no goals for their third game in a row.

“ We keep making strides as a team to get better, we have had lots of injuries but they keep showing resilience and continue to battle through them to help the team to a 4-2-1 record on the season so far.” Coach Wilson said.

The Rams will begin conference play on Tuesday, and hope to continue the win streak.

“ We have played three of the toughest teams in California in the same week, this young team steps up for the challenge whatever it is. The season should become easier for us as we head into conference play.” Coach Wilson said.

The Rams have all the momentum going for them right now as they get ready to face their division opponents in the upcoming week.

They look forward to try and extend their win streak on the road against division opponents Ohlone on Tuesday Sept.25, along with keeping their opponents scoreless for the fourth game in a row.