A national campaign calling for the pardon and release of long-time political prisoner Leonard Peltier is gaining momentum nationally.

Peltier, of the Turtle Mountain Chippewa Nation and member of the American Indian Movement (AIM), was convicted for the deaths of two FBI agents during a shootout on the Pine Ridge Indian Reservation in 1975. He was sentenced to two consecutive life terms on June 7, 1977. He has since been incarcerated for over four decades at the United States Penitentiary at Coleman, Fla.

The 77-year Peltier tested positive for COVID on Jan. 28 and has been suffering from a painful, persistent cough, according to his attorney, Kevin Sharpas, who first reported to HuffPost.

Sharp has reported that he has yet to receive any updates on Peltier’s condition. “No one has spoken to me, so I have no idea how Leonard is doing,” he told BuzzFeed News.

In response to BuzzFeed News’ questions, a White House official acknowledged Peltier’s request for clemency and the public support for his release. They added that all requests for pardon or commutation go through the White House Counsel’s Office.

A Bureau of Prisons spokesperson declined to comment on Peltier’s case, according to Stephanie K. Baer from BuzzFeed News, but said the agency cannot act alone to reduce an inmate’s sentence, noting that the BOP director must make a request to the prosecuting U.S. attorney to file a motion to do so.

The gunfight at the Pine Ridge Indian Reservation in 1975 involved more than 40 people, but only Peltier and three others were ever charged. Two of his co-defendants were acquitted in self-defense, and the charges against the fourth were dropped.

Many, including Carole Standing Elk, a longtime Board Member of the National American Indian Movement and Director of California AIM, consider Peltier to be a political prisoner, owing in part to the manner in which his case was prosecuted.

“Peltier was never proven to have fired the fatal shots that killed the agents,” Standing Elk said.

Prosecutors instead relied on testimony from alleged witnesses who later recanted their statements, claiming that FBI agents threatened and coerced them into lying.

According to Peltier’s attorney, years after his conviction, it was revealed the government withheld a ballistics report that showed the shell casings collected from the scene did not come from his weapon.

In San Francisco, Peltier’s supporters held a news conference on Feb. 22 to announce that the San Francisco Board of Supervisors approved a resolution declaring Feb. 24 as a “Day of Solidarity With Leonard Peltier.” Tony Gonzales of AIM-West and the American Indian Cultural District submitted the resolution that was introduced by Mission District Supervisor Hillary Ronen.

The resolution also urged “the federal government to release Leonard Peltier and grant clemency after many years of unjust confinement as a political prisoner,” Native News Online reported.

The San Francisco Board of Supervisors, according to Native News Online, directed the Clerk of the Board of Supervisors to transmit a copy of the resolution to President Joe Biden, House Speaker Nancy Pelosi, Senate Majority Leader Charles Schumer, and U.S. Attorney General Merrick Garland.

On the “Day of Solidarity with Leonard Peltier” supporters stood on the front steps of City Hall with banners calling for Peltier’s release from prison.

The action was followed by an indoor rally at Brava Theater in the Mission District on Feb. 24 and a public demonstration on Feb. 25 in front of the U.S. Federal Building on 7th and Mission street.

Supporters gathered peacefully in front of the Federal Building, holding up signs, handing out pamphlets, and wearing t-shirts in support of Peltier.

Shannon Rivers, a Native American leader in support of indigenous women and men in prison, questioned in his speech to attendees how a person can be given two life sentences  when there was no evidence proving Peltier’s guilt. 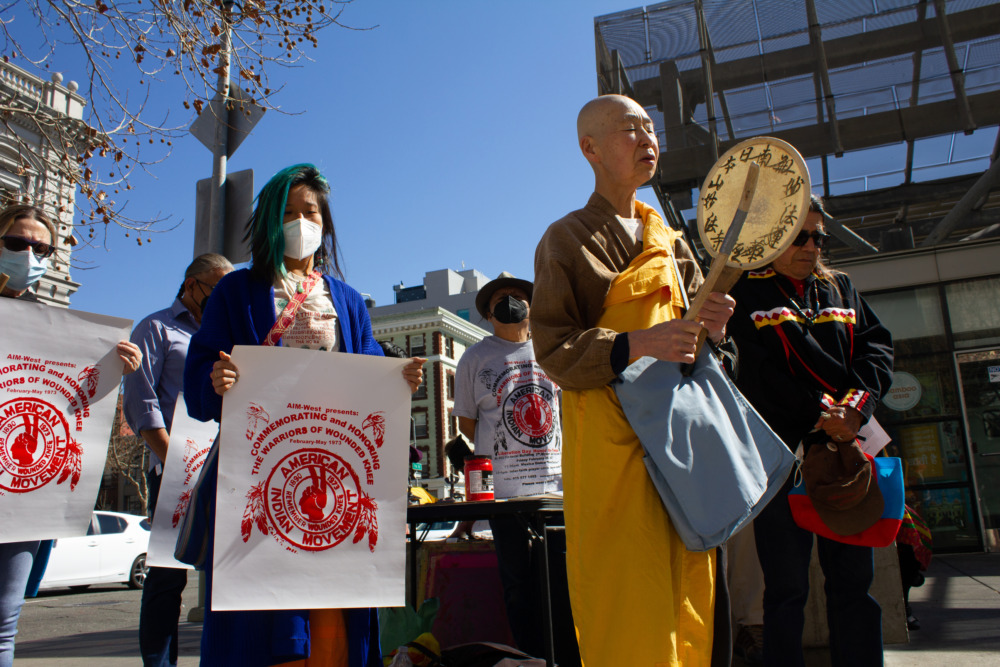 Mission resident Louie Gutierrez performed an indigenous dance honoring those killed in the battle of the Oglala Sioux Reservation in Pine Ridge.

To-date, Native-American state legislators and members of Congress, including Sen. Patrick Leahy, have made personal appeals to President Joe Biden to release Peltier. “He is precisely the type of person who should be considered for clemency,” Leahy said in a statement.

Meanwhile, Peltier’s supporters continue to call for his immediate release. “Today he is ill. He has diabetes, a serious heart ailment, prostate disease, and now, COVID,” said Carole Standing Elk, a longtime Board Member of the National American Indian Movement and Director of California AIM. “He needs our help now. If we do not move fast and demand President Biden grant him Executive Clemency, he will die for nothing. We have to step up now before it is too late.”