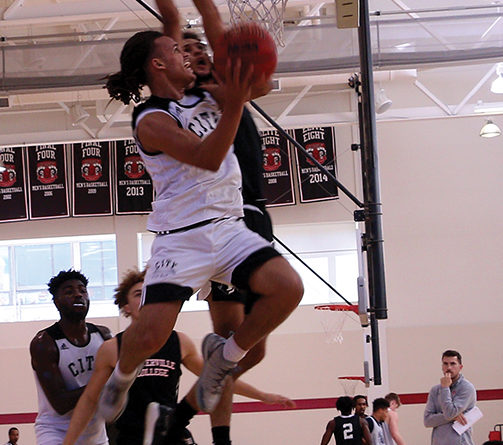 San Francisco City College’s Men’s Basketball team is looking to pick up right where they left off last season by returning to the State Championship but, unlike like last season, this time they hope to leave with a victory.

Returning as head coach for his 17th season, Justin Labagh, is optimistic that this year’s team will surpass the achievements of last year’s.

Coach Labagh knows it won’t be an easy road to the top and is looking to challenge the team with some hard competition at the beginning of the season. “Our league is going to be really good,” said Coach Labagh. In particular he knows that Mt. San Antonio College and San Diego City College will pose a challenge. “After we play them, we’ll have a really good idea of where we stand,” he added.

Coach Labagh believes that his team’s unselfish playing style is what gives them their edge. “Our whole life-blood is taking the extra pass. Our team is unselfish, if we keep that up [being unselfish] we have a chance [at winning state championship].”

Coach Labagh also feels that the former University of Oregon player has professional potential. “I think he will be in the NBA within the next four years,” predicted Coach Labagh.

Norris shares Coach Labaugh’s optimism for the season. “I feel really good about the season already,” expressed Norris. “I think that the team got really good chemistry this year. All the guys get along and communicate really well.”

Norris thinks that there are still things that need to be tightened up before the team reaches their full potential. “We need to communicate more on defense. Just doing the little things, talking on defense, finishing the defense with a rebound, not allowing the offense the rebounds. I think the biggest thing is just eliminating our turnovers.”

Norris is playing at City College after playing his Freshman year at the University of Oregon. “I didn’t want to stay out a year and then come in the next year rusty,” Norris told the Guardsman. “Hopefully win a state championship with this team this year and then get back to D1 level.”