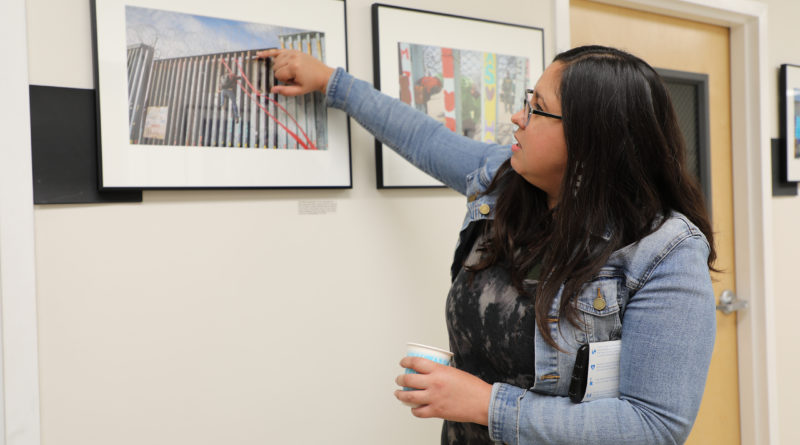 City College’s Journalism Department is hosting a documentary photography exhibition at the Front Page Gallery that explores the harsh reality of the United States’ strict and inhumane immigration policies’ effect in the border city of Tijuana, Mexico.

Photographer, writer, and former photo editor of Mission District bilingual newspaper El Tecolote, Mabel Jiménez, went to visit her hometown Tijuana last February and saw herself in the midst of the harsh reality of immigrants trying to cross to the U.S. through the Mexican gateway city.

Then, she decided to photograph eye-opening images of that reality and the exhibit “Tijuana: The refugee struggle at the border” was born.

“It felt like the eyes of the world were in Tijuana, which is a weird feeling, because when you grow up somewhere what is normal to you; then, all of a sudden, everyone outside and the rest of the world is looking at,” Jiménez said.

Many Central Americans cross the continent to reach the city of Tijuana, which is located on the coastal border of California. The cities of San Diego, in the U.S., and Tijuana are side-by-side divided by walls, fences, huge barbed wires, and high border surveillance that are meant to keep the influx of thousands of immigrants from crossing.

In the past few months, images of the horrifying conditions of immigration detention shelters have startled the world. However, this exhibit delves into the conditions outside of the U.S.

Jiménez explained that the burning flag photo represents the immigrants protesting against U.S. enforcement of their immigration laws. Many of them are asking for asylum, and in many cases, they have to go through detention first to request asylum. “This is meant to keep you out, this is meant to hurt you,”  said Jiménez when talking about the border wall in Tijuana.

The wall, fences, and surveillance in Tijuana extend into the Pacific ocean as can be seen in one of Jiménez’s photos.

Jiménez’s photos explore the interesting Mexican side of the wall, which is filled with artwork whereas the American side is rusty, dark and intimidating.

The exhibit also explores the hardship that Mexican shelters suffer from the large influx of immigrants who get stuck at the border. Thousands of people legally cross the San Ysidro border from Tijuana to San Diego every day. Many of the Central Americans cross the continent northwards and find themselves stuck in the Mexican gateway city.

A range of different emotional images was captured for this exhibit, and Jiménez’s photos are a political statement to bring Americans closer to the reality that this country faces on the other side of its border.

What Jiménez hopes to achieve with this exhibit is that, “People [immigrants] don’t want things handed to them. People want the dignity of earning their own way. Just an opportunity to do that without rain of bullets around you all the time, without gangs threatening you all the time. So, I hope what people [viewers of the exhibit] get is ‘yes, these people are going through a lot of things,’ but I want them to be seen not as victims, which is partly true, but also as survivors.”

This is the seventh exhibit held by the Journalism department at the Front Page Gallery.

“We are thankful that you are here, that you are part of this, part of our history at City College, the Journalism program. I think this is what journalism is all about. Helping tell the stories of the people, not only words but in pictures,” said Department Chair of Journalism Juan Gonzales during the opening reception on Oct. 18.

“Tijuana: The refugee struggle at the border” can be visited from 11 a.m. to 4 a.m., Monday to Friday, at City College’s Bungalows 615, Ocean Campus. Special hours can be arranged with the department. The exhibit closes on Nov. 8.

All the photos are available for purchase and the money raised from the shelter photos will be donated to the shelters by Jiménez.