In a move to increase inclusivity and address the needs of non-binary students, City College’s facilities department implemented all-gender restrooms throughout college campuses and centers, but while students and faculty in the LGBTQ community welcome this change, issues with reporting vandalism have yet to be resolved.

As mentioned in an email sent to the college community on Mar. 1, all-gender restrooms benefit those who are gender non-conforming, accompanying children, or need assistance in the restroom.

For transgendered people, however, using gender-specific restrooms in public can mean risking harassment.

In a 2015 U.S. Transgender Survey, the National Center for Transgender Equality found 24 percent of respondents had their presence in a bathroom questioned or challenged in the past year. 59 percent had avoided using a public restroom out of fear for their safety. 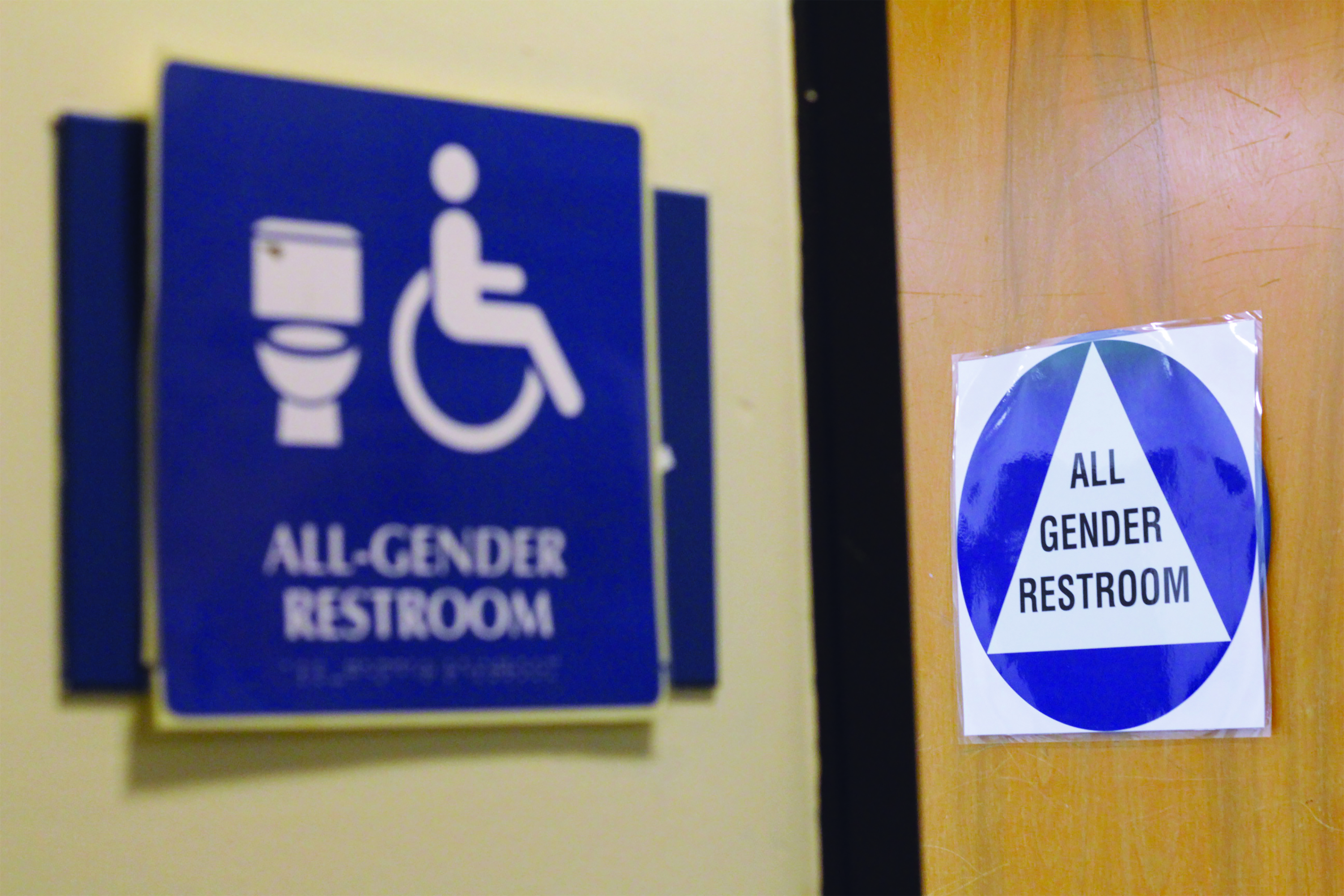 All public single-occupancy restrooms in San Francisco must be designated for all genders and be equipped with proper signage as required by a 2016 law. A similar law at the state level passed in 2017.

Jennifer Dawgert-Carlin, Natalie Cox and Matt Pevey, members of the all-gender bathroom subcommittee, helped advise the school on transitioning its existing restrooms to be more accessible to all-genders. By October 2018, facilities had a final list of recommendations.

Signage implementation began early January despite numerous delays during fall semester and winter break. Several signs remain temporary but are slated to go up permanently by the end of spring.

“I’m so happy that I found a non-gender one-stall bathroom,” Vesselenyi said. “That was a really huge relief that I hadn’t acknowledged as much before, because it was just so standard to go into a space where I’m uncomfortable.”

Despite optimism of the school’s push to add more gender-inclusive restrooms, the roll-out has not been particularly smooth.

A few students reported that all-gender bathrooms are sometimes locked during class hours. There have also been issues with signs being damaged or removed.

“I’m getting reports constantly from students of signs being taken down, or graffiti up in the stalls or the signs being graffitied over pretty angrily,” Haefele-Thomas said.

It is difficult to determine the amount of targeted vandalism all-gender restrooms received since implementation because there is no clear protocol as to how to report such incidents.

On Mar. 5, a “W” for “women” was scribbled over an all-gender sign but was then altered to read “Whoever.” The interior all-gender bathroom sign had been removed and was eventually reverted back to the original women’s restroom signage.

Multiple students at the Queer Resource Center said this type of defacement had been occurring for three to four weeks.

“I think it’s been kinda beautiful seeing the back and forth of people, like the solidarity of people, one person tagging ‘whoever’ or making a picture out of the ‘W’,” first year student Em Alaimo said.

By Mar. 11, the exterior all-gender sign on a nearby restroom had been replaced by men’s restroom signage. Students searching for all-gender bathrooms were directed to the second floor.

One second-year student, who identifies as a transwoman and asked that her name be kept private, initially appreciated the change that the all-gender restrooms signified.

However, she was disappointed in the college for allowing the all-gender restrooms in the Creative Arts building be moved to the second floor, after the gender-policing vandalism had increased.

“If the college just left it as gender neutral, cleaned up the thing, and reprimanded the people [responsible], it would have been just fine. In fact, that’s what they should be doing,” she said. “Instead they’re legitimately just condoning transphobia.”

When approached for more information on the situation, Smith referred to Director of Media Relations Connie Chan.

“At this time, we do not have any formal complaint or reporting of vandalism, harassment or hate crime related to all-gender restrooms,” Chan said.

Though Chan did not know why the all-gender restrooms had been moved to the second floor, she promised to look into the matter.

Dawgert-Carlin believes this is the sort of decision that warranted discussion because it isn’t “the wild west.”

Who reports to whom?

Who and where to file future complaints remains obscure because the facilities email distributed in March did not provide information on how to report locked doors, vandalized signage or consequences for policing gender in restrooms.

“We want anyone within our college community in any situation that they felt constituted as harassment to please report to the campus police immediately,” Chan said.

Dawgert-Carlin is skeptical of whether campus police would treat this sort of case as a “hateful incident” or ordinary vandalism.

Title IX, a federal civil rights law, bars sex discrimination in education programs or activities that receive Federal financial assistance. According to Dawgert-Carlin however, if consistent defacement creates a hostile educational environment, filing a report with Title IX might not fix the problem or signage immediately.

Despite the discrepancies, she believes it will push City College to be better as an institution.