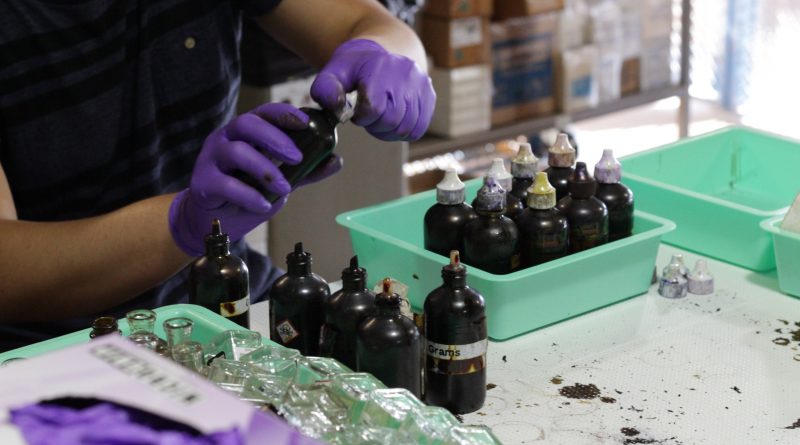 Behind closed doors for authorized personnel and up a narrow staircase to a biology department storeroom, student lab aide San Bhujel prepares the tools and solutions needed for upcoming laboratory classes.

“It’s sad in a way to not be working with friends that used to work here,” Bhujel said. “It adds on more stress to students and lab aides who are currently working here, which are not many.”

City College’s biology department operated with 14 student workers last fall but as of January, the computer science major is one of five remaining lab aides caught in the middle of a slashed budget. Student work hours were also cut from 10 to 4 hours each week.

To make up for lost labor, Biology Laboratory Manager Nicola Burrows assists student workers in lab preparations and clean up. “I can only do so much,” she said.

It takes six months to train new biology lab aides, many of whom professors recommend to Burrows as potential hires.

“We have great students here, and they need to be made first. We do need to support them, and supporting them is helping make sure they live,” Burrows said. “We can give them free classes, but if they can’t afford to live in San Francisco it’s a problem.”

The responsibilities of each student worker vary by department and center.

Students may qualify for Federal Work Study (FWS), a federally funded program that determines qualifications based on financial need. Grants and CalWORKs positions are funded at the state level and available to welfare recipients.

The Office of Student Employment manages lab aide positions, ranging from library and office assistants to peer mentors and tutors. Students must complete the Student Hiring Eligibility Process (SHEP) and meet all qualifications listed on the job posting.

Lab aide funding is not as concrete as one would expect in a budget report given that overall aggregate numbers are used.

Each year, City College budgets pools of funding to designate monies for student workers, according to a 2017 board of trustees action item that increased student hourly wages from $10.74 an hour to $15 starting July 2018.

Despite the board’s unanimous support for the new wage, students and faculty questioned whether the increase would limit student opportunities to work on campus.

Chancellor Mark Rocha and college trustees guaranteed the funding would not be affected and student hours would not be lowered. That was no longer the case when the 2018-19 academic year began.

“I recall that promise and I made it so the question is in keeping that promise, that money will have to come from some place. That some place, I don’t see it,” Rocha said at a Feb. 28 board meeting.

The Guardsman did not receive a follow-up statement from the Chancellor’s Office by press time.

Trustee John Rizzo, who believed the minimum wage increase for students was long overdue, emphasized the need for continued discussions regarding the issue.

“If I’m going to break the promise, I want to be involved in breaking a promise that I made and not just have it happen,” Rizzo said.

The problem presented by the budget deficit is twofold.

Professors are paid 85 cents on the dollar for the laboratory portion of teaching, a frustration that faculty have lobbied against in the past. With fewer lab aides provided, instructors face larger workloads and have less time to address student needs during class.

“I am so honored to serve my students, but at this point in my career I don’t feel that I have the support to actually do an adequate job,” biology professor Crima Pogge said. “I am so worn down by these years of disrespect that we have encountered.”

If the jobs of faculty at City College become more onerous than at other community colleges, the word will get out and make it more difficult to attract new teachers, he said.

It wasn’t all bad news for the chemistry department, which was able to save seven lab aides from layoffs on Mar. 12. Yet, it remains unclear as to how the funds appeared and from where.

“I think everyone was pretty much disappointed and a little frustrated because we thought we’d have to look for jobs in the middle of the semester,” cellular biology student Oceana Tavasieff said.

The position provided Tavasieff with flexible hours and practical work experience. While the chemistry lab aides remain slightly understaffed, Tavasieff is happy that her opportunity to work on-campus was not cut short.

“Small picture, it was an exasperating experience that we all went through but it’s done. And it ended, for us, for the best,” Armstrong said. “The bigger picture of what it says about how the college is running is not so encouraging.”
Academic Senate First Vice President Simon Hanson serves on City College’s budget committee. To his understanding, lab aide funds were built into last year’s budget and at no point over the course of the year were there conversations to reduce it.

For Hanson, there’s saying and then there’s action. If students are indeed first then the college’s actions and where money is spent would reveal that priority.

Moving forward, Hanson hopes to see a more transparent, thoughtful and detailed budget that all levels of the institution work towards to make happen. Meanwhile, Rizzo plans to develop a board budget committee that will help prevent financial surprises in the future.