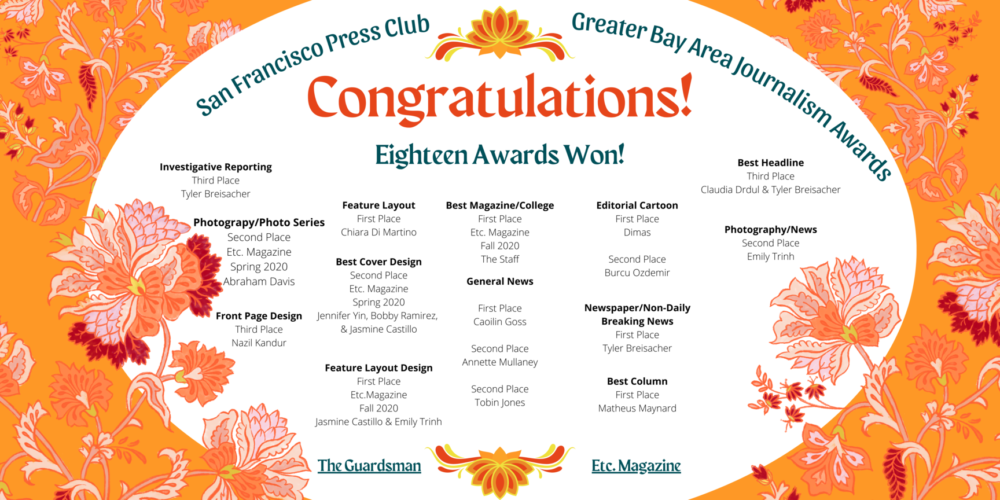 Matheus Maynard, who captured first place for best college media column, wrote on a variety of topics in 2020, including coronavirus, Donald Trump, and the wildfires. Maynard loved writing opinion pieces in particular because of the “freedom” he had to organize his thoughts.

He cited the mentorship of Journalism Department Chair Juan Gonzales as essential to his growth as a journalist. “Juan is amazing. He is one of the best journalists in California, if not the country.” Maynard is now studying international relations at San Francisco State University.

Chiara Di Martino, who won first place for feature layout, said her journalism education at City College was essential for setting her on the path she’s on today. She met the Editor-in-Chief of El Tecolote, Alexis Terrazas, while studying at City College and now works part-time for the publication as an advertising manager. Di Martino also freelances throughout the Bay Area, with her latest images appearing on Muni buses in the city.

Multiple award winner Emily Trinh, who is finishing up her photography degree at City College, said she “learned a ton” while working on the Guardsman and Etc. magazine. “They gave me a very practical look at what a real newsroom might look like.” She said she felt “honored and encouraged” by the awards, and that they are “great motivations” for her to keep pursuing her dreams.

Annette Mullaney, News Editor of the Guardsman, won second place for her news story about drastic cuts across City College. “I’m super honored to be one of the Guardsman writers recognized. This is a great program that produces a ton of quality reporting,” Mullaney said.

“I continue to be impressed by our students as they succeed in competitions, vying for awards in everything from writing to design and photography,” said Juan Gonzales. “It’s a tribute to their passion and their striving for excellence. I’m just so proud of them,” he said.