By Kassandra Dunne/Special to the Guardsman

Seeking shelter from the cloudy drear outside, a crowd of about 40 people gathered for a reception at the second-floor gallery at the Rosenberg Library on April 4, surrounded by the bright and ornate clothing that represents

Katrina Rahn, an exhibit librarian at City College, coordinated the exhibition and event that celebrated

The collection of costumes on display was previously showcased at the San Francisco Public Library (SFPL) during the spring of last year, which is where Rahn was first enamored by the exhibit. She hopes the exhibit will inspire the interest of students whether it be “fashion, history, or ethnic studies” and even “programs for which the connection might be less obvious but that makes it more exciting:

Rahn worked closely with writer, educator and co-sponsor, Xiebing Cathuen, who curated the collection. Cathuen is a Chinese immigrant who came to the US in 1997 and has taught at various schools in the Bay Area.

She also founded the Dasen American Academy, which seeks to promote essential principles and ethics to Bay Area youth. Passionate about her Chinese heritage, Cathuen is eager to share her knowledge with others.

“China has sometimes been characterized as a monolithic nation without much diversity,” Cathuen told SFPL. “These costumes tell another story. All are different from one another and each represents a distinct culture with its own unique history, traditions and patterns of behavior.”

By showcasing traditional dress from regions in China, a visual is created and demonstrates what diversity looks like.

The exhibit in the Rosenberg Library houses only a fraction of the collection, due to space restrictions, but still encapsulates the rich history and culture of these various Chinese groups. 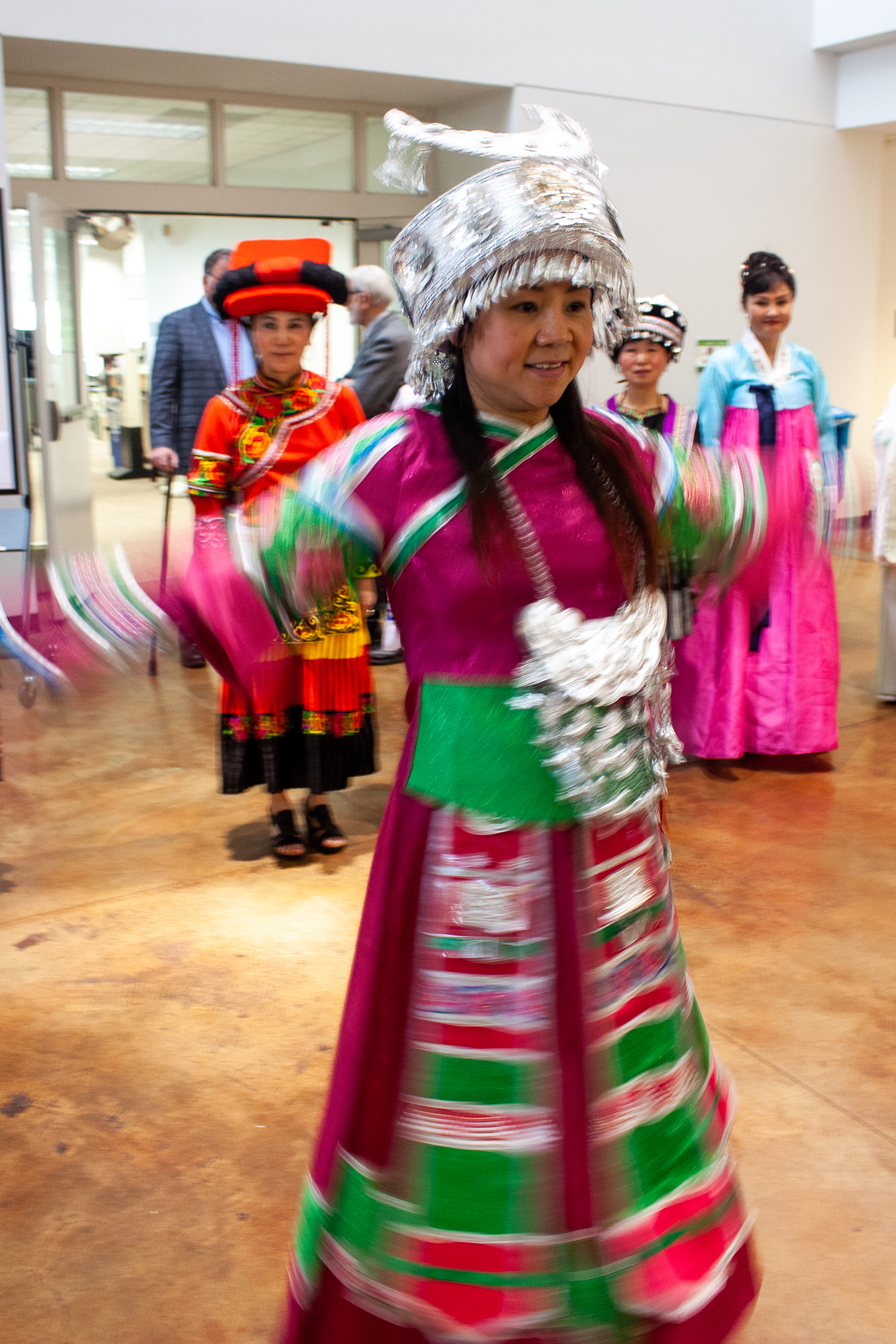 “[Chinese dress] is the result of the blending of all ethnic groups in the vast land, where 56 separate ethnic groups have been officially recognized,” Rahn said.

According to Rahn, the exhibit received positive feedback, citing direct comments from students who were surprised but proud to see clothing from regions where their family are from.

Most studies of Chinese ethnic groups focus primarily on the largest region, the Han, failing to acknowledge the many other minority groups in the region. The exhibition seeks to shed light on those minorities and encourage the curiosity of its viewers to explore the many other groups in China.

The outfits featured in the exhibit are those typically worn by women and utilize a variation of a hats or headpieces. Additionally, they all include either a dress or skirt combination.

Typically vibrant and rich in color, the outfits often utilize mixed textures such as heavy embroidery with pristine pleats. Metallics are prevalent in dress throughout many areas and can be seen in elaborate gold stitching along hemlines or in silver chime-creating accessories.

The exhibit will run through May 15 and is accessible during library hours.

Melissa San Miguel, an exhibit student assistant and graphic designer, created a free user guide for visitors that encourages questions about the garments and cultures. Rahn also created an online resource guide for the library website to provide students more information about the regions featured in the exhibit.

Riding on the heels of the exhibit’s success, Rahn is already hard at work for the Fall 2019 exhibit. 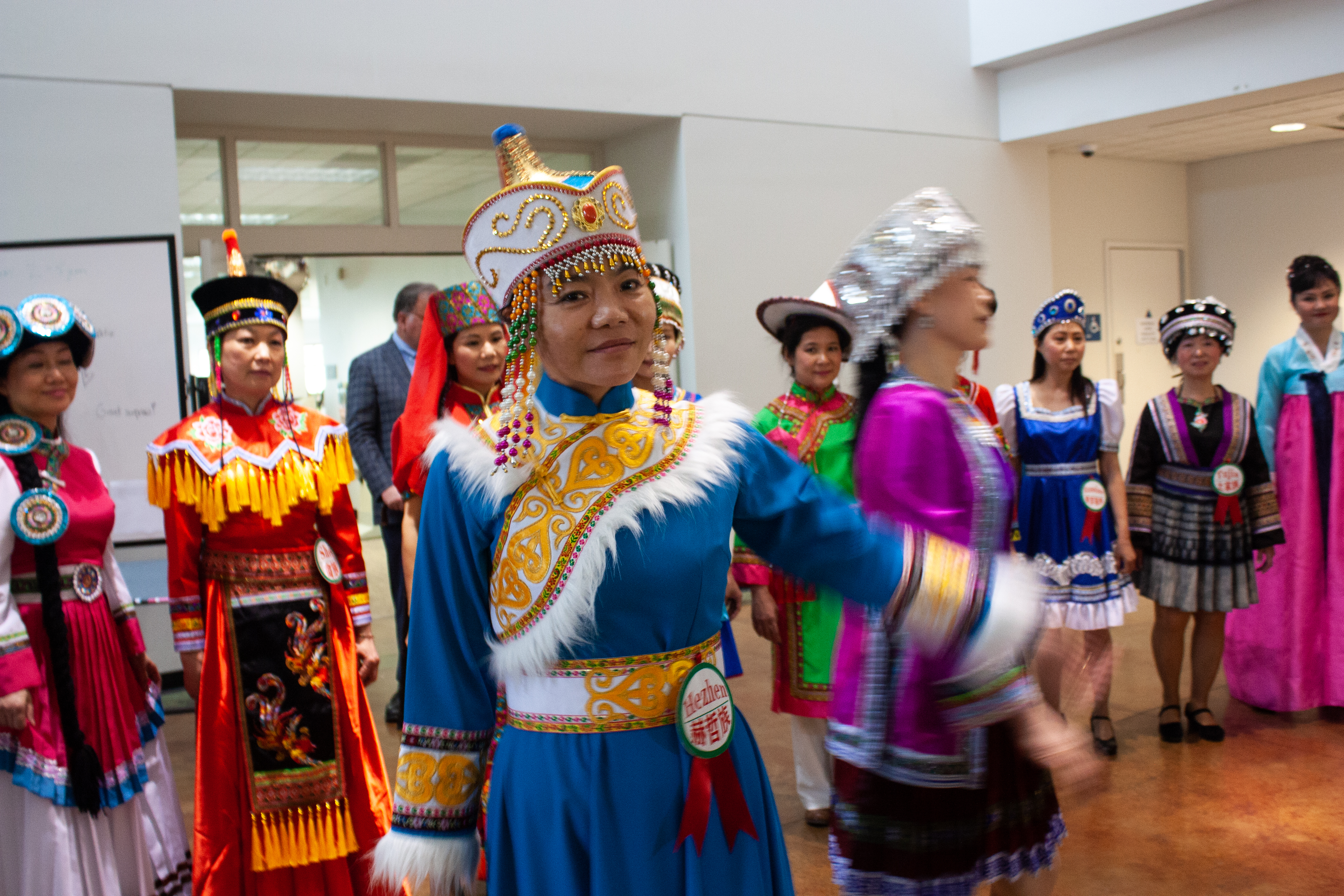