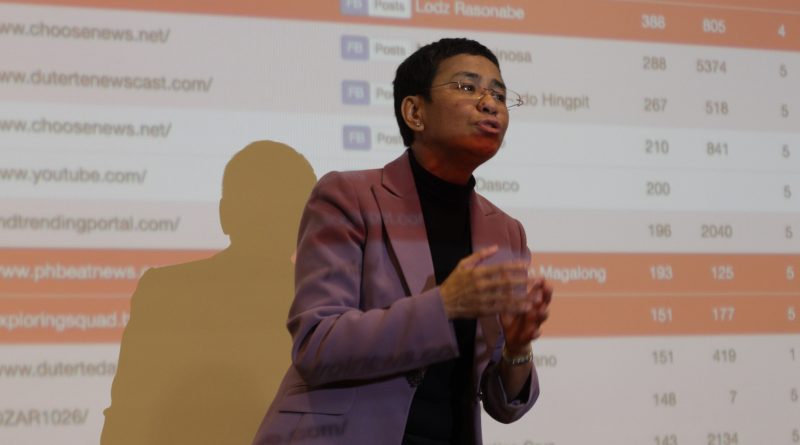 Philippine journalist Maria Ressa, named one of Time magazine’s 2018 people of the year for her work in defending press freedom, briefed the community and press at the Bayanihan Community Center on the weaponization of social media and the threat it poses on democracy.

The Rappler co-founder and Chief Executive Officer emphasized the need to organize communities for democracy online because the continued spreading of lies weakens the fabric of a country’s democracy.

“The global phenomenon that we are all facing is that social media changes reality because a lie repeated a million times is the truth,” Ressa said.

In the Philippines, state-sponsored online hate and harassment campaigns aimed to intimidate opposing views and silence those deemed critical of Philippine President Rodrigo Duterte. It echoes similar strategies utilized by the Russian government during the 2016 U.S. presidential election.

“In this day and age it is about pushing out so many lies, false news, and information that people have no idea what to think,” she said.

Ressa holds social media platforms such as Facebook and Twitter accountable as the new gatekeepers of truth and believes they are the only ones capable of solving such issues in the short term.

In the meantime, it’s important to recognize that technology is here to stay and finding ways to use it responsibly is vital.

Ressa encourages the American youth to push the U.S. government to stand by its democratic values.

To Ressa, silence is complicity.

“This is the time to tell people here is the line and you have to make sure that the government does not cross it because when it does, we are no longer a democracy,” Ressa said.

Ressa was arrested upon arrival at Ninoy Aquino International Airport on March 29., following her talk in San Francisco. She posted bail and pleaded not guilty to tax violation charges.

Her arrest comes at a time when journalists around the world face increased pressure from political forces.

Journalism matters now more than ever. There is no better time to be a journalist than today, said Ressa as she addressed a crowd of young student activists and aspiring journalists.

“You will define what journalism will become in this time of creative destruction,” she said.

Ressa remains adamant on her responsibility as a journalist, for “the mission has never been as important as now.”