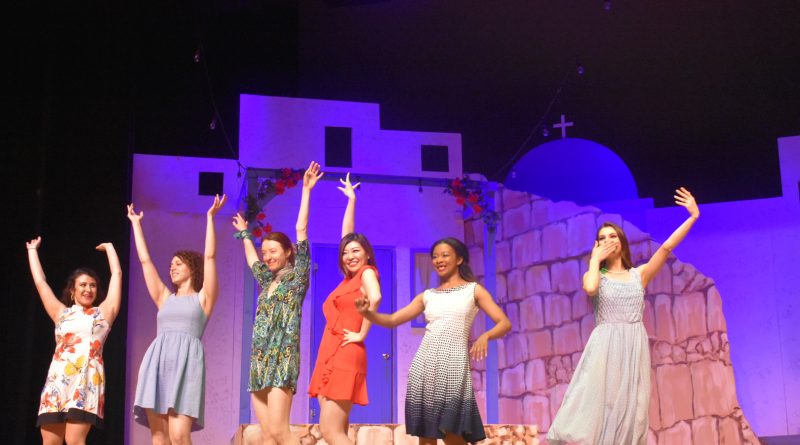 Mamma Mia came to life last Thursday at the Diego Rivera Theatre. “The stage setting, lighting and actors’ costumes really made me feel I’m on the island,” Da Lee said. He is a Journalism major at City College who also attended the free student preview on April 11.

The crowd was small, however members of the audience still laughed and danced. Tanya, played by Elaine Jennings got lots of giggles during her solo “Does Your Mother Know” where young beach boys drooled over her as she teased and weaved her way around them.

They did flips and other small stunts as each boy tried to catch Tanya’s eye. She was nonchalant, sipping her cocktail and lounging across their flat bodies while she navigated her way around the stage.

“My favourite part of everything was everything. Everyone’s very enthusiastic and committed and fun,” Jennings said. She owns a catering company with her husband but is focused on theatre at the moment.

Another favourite was the flipper scene where Sky, played by Danny Tran and Mia played by

Allya De Los Santos sang “Lay All Your Love on Me.” The two rolled around on set during the duet, and Sky supported by his band of groomsmen showcased his intense passion for Mia.

The audience couldn’t control their laughter as grown men in flippers, board shorts and goggles danced in synchronized fashion, holding hands and singing whilst hopping across the stage.

“The energy is higher than it is in rehearsal, so it’s a lot of fun,” said Los Santos. She is a T.V and Film Production major at City College, and this was her first musical.

Bill, one of Mia’s fathers played by Rafael Musni spoke about how he maintains that level of energy for four days. “Eat three squares a day, drink lots of water, take a nap once in a while and try not to stress about it,” said Musni. He has been doing musicals for seven years and  also works in finance.

The music, directed by Michael Shahani was provided by a live orchestra that sat back stage, directly behind the scrim which helped to diffuse light. The costumes represented the island theme of Mamma Mia and the actors wore bright, colorful, lightweight clothing throughout.

During the last song “Dancing Queen” cast members ran out into the audience encouraging them to dance. This was successful as the crowd stood up cheered and boogied through the final number.

Mamma Mia was a funny, light and interactive experience that showcased the skill set of a diverse and musically talented group of people. However, it will be the last musical at City College due to the recent cutbacks by the administration on courses with low enrollment.

“There is no funding for next year. I am shattered that it is all coming to an end.  I’ve been blessed being able to work with all the talented people that have come my way here at CCSF,” said director Deborah Shaw.