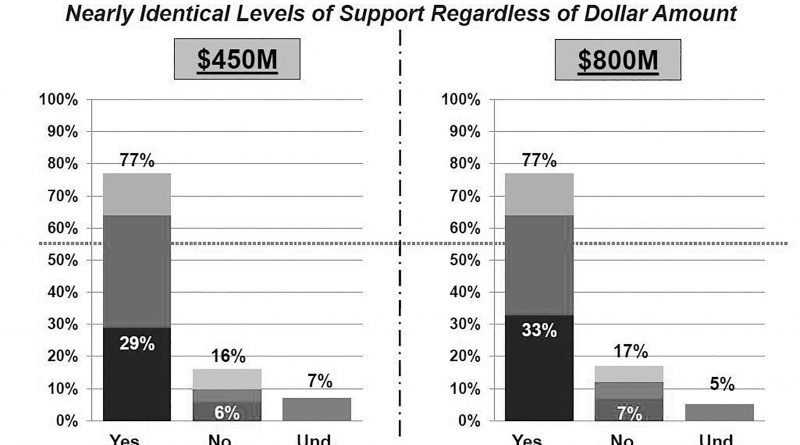 City College is going back to the voters to raise $1.3 billion for facilities and infrastructure — and a poll indicates that any measure the college puts forward will pass handily.

At the college’s Board of Trustees meeting on Nov. 13, Tulchin Research, in coordination with Whitehurst/Mosher Campaign and Media, presented the results of a facilities bond survey.

They polled 800 likely November 2020 voters, with half voting on a $450 million bond and the other half on an $800 million bond for the 2019 election. 77 percent of participants for both groups voted “definitely yes,” “probably yes” or “lean yes,” and the numbers for each category were nearly identical between the two groups.

The firms suggested starting with a $600 million to $800 million bond, which would require 55 percent voter approval.

The hypothetical bond description stated it would “fix and improve City College facilities, provide structural repairs to improve safety, update existing classrooms and add new classrooms for science and technology, provide student, faculty and staff housing and modernize the campus and better integrate it into the surrounding neighborhood.”

Either of the proposed bonds would cover only a portion of the money required to carry out the college’s draft Facilities Master Plan, estimated at $1.3 billion. The college’s existing facilities have racked up $450 million in deferred needs, according to a City College capital plan update in 2016.

Whitehurst/Mosher recommended that the college acts in phases to raise over one billion dollars.

Polling also revealed the electorate’s support for the individual items proposed to receive funding. For example, 80 percent of voters supported fixing and improving Ocean Campus, and between 89 and 91 percent supported general repairs that include seismic retrofitting.

Survey results also showed that 51 percent of those polled have either attended City College themselves or have known someone in their household who has.

“There is no [other] institution in San Francisco with a direct personal relationship — there is no one with a rating — that is 50 percent,” said John Whitehurst, principal of Whitehurst/Mosher. “That is spectacular.”

Trustee Thea Selby said she wanted to ensure that all bond funding would be spent appropriately.

“We do not have a good record for using the money for what we said we would use the money for,” Selby said, referring to the Performing Arts Education Center, which was supposed to be funded by the college’s successful 2005 bond.

“A lot of people say, ‘You’re borrowing from your children,’ and I happen to have children who live in San Francisco,” Selby said. “So it is a concern of mine that we’re actually spending the money on what we say we’re going to spend it on.”