Skip to content
News News Briefs Board of Trustees
July 19, 2012February 25, 2020 The Guardsman board of trustees, WASC, accreditation, ACCJC, saveccsf

Despite the long road ahead, the City College Board of Trustees were good-humored last night after a three hour meeting where they discussed their role in the process of drafting a plan to save the school from losing its accreditation.

They have until October 15 to complete a preliminary report that addresses the recommendations of the accreditation commission but will likely complete it before then.

Interim Chancellor Pamila Fisher informed the Board that they may participate in any of the 14 working groups that have formed to discuss each of the commission’s recommendations but asked that no more than two trustees sit on any one group to avoid undue influence.

Their role in the groups will be to listen, share information and act as a liaison between the groups and the board, she said.

Redefining the school’s mission statement is the most urgent next step, Fisher said.

Here are some of our favorite tweets from last night’s meeting. Follow us @sfbreakingnews for periodic updates about what’s happening at our school. 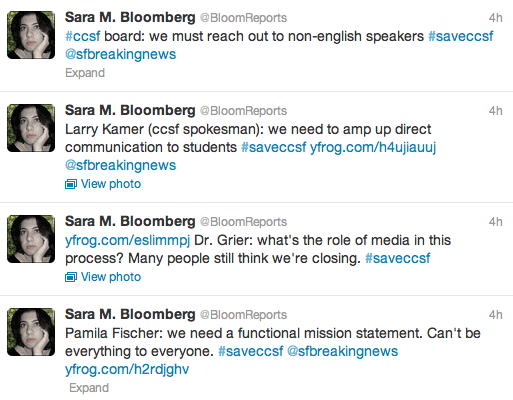