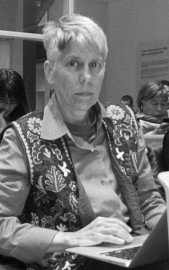 By Lavinia Pisani
The Guardsman
City College’s Academic Senate President and Librarian Karen Saginor was honored with the Full-Time Faculty Member of the Year Award by the Faculty Association of California Community Colleges during its annual Advocacy & Policy Conference in Sacramento.

Elected in 2010 A.S. president, Saginor’s responsibilities include overseeing the Academic Senate’s Executive Council and making recommendations to the Board of Trustees on topics ranging from curriculum and academic programs to grading policies and degree requirements. The A.S. is the governing body for all faculty.

During 2011, she was also instrumental in compiling reports that analyzed the potential effects of the Student Success Task Force’s recommendations, which was adopted by the Board of Governors in January 2012 and signed into law five months later.

“I am very grateful to my colleagues for nominating me and thinking I am worthy of this honor,” Saginor said. “Although, with so much happening here at City College, it is a little hard for me to think beyond.”

Since July 2012, she has also been tasked with leading faculty through the process of addressing the school’s accreditation crisis and contributing to the “show cause” report, which the college must submit by March 15.

The Board of Trustees approved the final draft of the report on Feb. 28.

“As a librarian I love sharing information,” Saginor said.

Saginor is optimistic about the future, but likens the college to a student that works very hard to pass a test and is still aware that they probably won’t get an A despite their best efforts.

“What really makes working at City College rewarding is our students,” Saginor said.

Saginor’s term as A.S. President ends this semester and elections for the next term will be held in May.