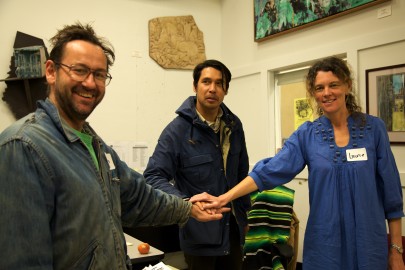 The show and reception was filled with students, aspiring artists and various acquaintances of the artists, reinforcing the reputation of the department for having well-attended events.

“They’re the most successful artists we ever worked with,” Gallery Director and art instructor Nancy Mizuno Elliott said.

The three artists had attended City College together in the late 1980s and ‘90s.

Johanson and Reid had their work chosen for the prestigious Whitney Biennial, one of the most prestigious shows in the art world.

All three artists  were awarded San Francisco Museum of Modern Art’s Society for the Encouragement of Contemporary Art (SECA) award, and all three were in the inaugural 1997 Bay Area Now exhibition.

The City College Art Gallery exhibit, which features the artists’ collaborative and solo work in multiple mediums of print, watercolor and hand-drawn segments, to name a few, strives to capture the intimacy and interconnectedness of students and their experiences at City College.

“There are students here, and there are these people that I saw from all these different time periods of my life living in San Francisco,” Johanson said, voicing his excitement in attending the exhibition. “You can really see how art connects people through your time.”

Indeed, the connection shows through the orientation of the works, which were arranged by the artists themselves just before the opening of the gallery.

The display showcases a sort of childlike dialogue between Reid, Johanson and McGee that speaks to their roots. In broken yarn, self-portraits and minimalist sketches, the three artists communicated a spirit of collaboration.

“It was really just about whatever developed,” Reid said. “I loved that. That freedom to go where it goes. It’s stimulating. It talks into parts of me that I don’t normally talk into myself. For me, the collaborative work brings out sides of me that my own work doesn’t always. I just love that. It’s so fun.”

In the vein of the ongoing City College accreditation crisis, the three artists were especially vocal.

“I was talking to somebody here that thinks if it did get really bad, it could be a free-form utopia school, which could be interesting also,” McGee said. “Where people would just volunteer to teach in a very San Franciscan way.”

“A lot of my first art classes I ever took were here,” Johanson said. “There’s a diversity of people that go to school here. It’s a really great place, as a young adult, to learn about life and art-making at the same time. I could never have afforded to go anywhere else.”

As part of their gesture in creating an exhibition, the artists also collaborated on a print which was reproduced and sold at the reception to support the college, along with T-shirts that called for “art classes for the masses.”

“(Almost) Free Formed: Celebrating Old Days and Hoping for New Times at CCSF” will be on display at the Ocean campus Art Gallery until March 20.