“If there is anything positive we can say about Donald Trump, and there is not much, it is that he has made it very clear what the stakes are when we talk about the future of this country,” Sanders said.

Sanders’ speech emphasized the effect of economic inequality on education, explaining tuition fees and student debt keep many lower class citizens from scaling the socioeconomic ladder. He expanded the definition of public education from merely first grade to twelfth grade.

“Our job now…is to make certain that we are talking about making public colleges and universities tuition-free at every institution in the country,” Sanders said.

He thanked City College for “becoming a model for the nation” and starting what he hopes to see become a trend of free enrollment.

Sanders’ speech was preluded by a short speech from City College Chancellor Mark Rocha. A mixture of new age/new wave hits were muted as the event began, and Rocha immediately got the crowd chanting “Free City College!” before proclaiming enrollment was currently at about 47,000 students.

“Senator Sanders and I are both from New York,” Rocha said. “But…we’re in San Francisco now, and it’s time to get our San Francisco on!”

American Federation of Teachers (AFT) 2121 Political Director Alisa Messer spoke next, thanking everyone who worked and fought to make sure City College would not lose its accreditation. She also thanked her fellow AFT 2121 members for making Sanders’ visit possible.

Messer introduced three City College students who had volunteered to share their own personal stories.

“[We need] an education that teaches us how to think, not obey,” Win-Mon Kyi said.

Forty-four year old Teddy T spoke about his experience escaping the school-to-prison-pipeline by coming to City College where the school “made a way for [him] to continue his education even though [he hasn’t] received any form of financial aid in over two years.”

The final speaker was Street Violence Intervention Program Volunteer John Nauer who stressed the importance of higher-education in reducing homicide and violence rates.

“How are we gonna say to these youngsters…you need to get back into school, because at some point one of them is gonna check you and say, ‘Uh, excuse me…did you finish school?’” Nauer said.

Following the student testimonies, Member of San Francisco Board of Supervisors Jane Kim came up on stage to express her approval of free City College. Kim was the board member who first pitched the proposal for Free City. Via her Fair Share Package, Kim said, “We can and should ask those who have profited the most in our luxury housing market to pay a little bit more to make San Francisco more equitable for all of us.”

Her speech then segwayed to introduce Senator Bernie Sanders.

The event lasted about an hour and a half, and Diego Rivera Theatre was filled to capacity with additional overflow seating available in the Creative Arts Building due to high interest.

Potential attendees were originally asked to sign up via an Eventbrite RSVP link, but the popularity resulted in a raffle system being used to randomly select who would receive in-house seating for the Free City speech.

“Everyone who has the desire and the ability should be able to a higher-education regardless of the income of that family,” Sanders said in summary.

Sanders departed from the stage amidst whistling and cheering which lasted several minutes. 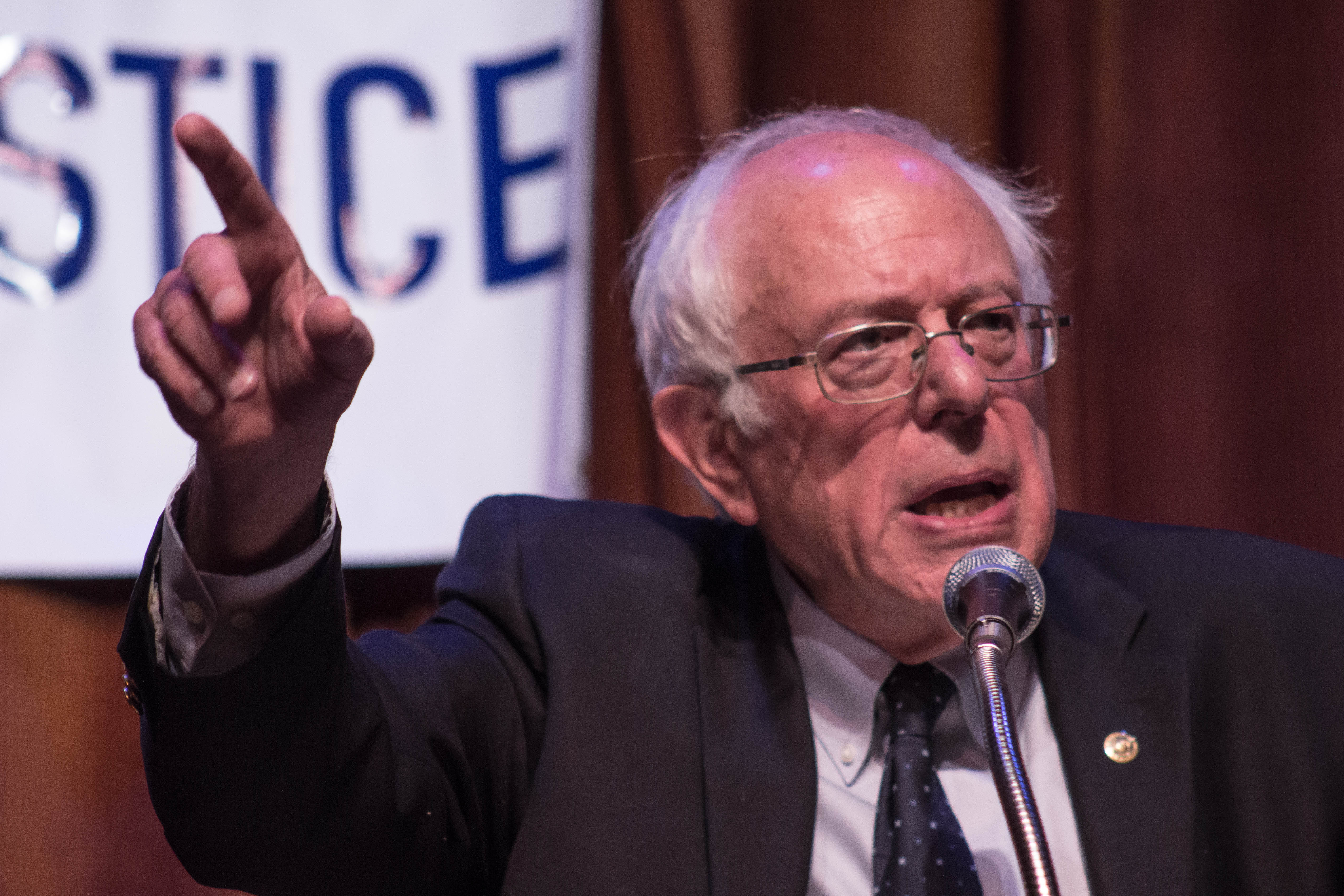 Senator Bernie Sanders speaks on the importance of free education and its benefits at City College’s Diego Rivera Theater on Sept. 22, 2017. (Photo by Jordi Molina/The Guardsman)