Tucked away through a series of corridors and far in the back of City College’s Evans Campus is a unique space that welcomes its students with the sound of clanging metal, the gritty scent of motor oil and a spacious expanse full of various dilapidated vehicles.

The night class assembled together on April 17 at 6:30 p.m. operating like a family under the instruction of veteran mechanic Frank Gagliardi who has taught within the City College Automotive Department for 46 years. Gagliardi said the classes were first offered under John O’Connell Vocational School under the San Francisco Unified School District becoming a City College class in the 1980s.

In Gagliardi’s garage there are no blackboards but students are welcome to drive their personal vehicles straight to the front of the class.

Byron Mejia, 28,  is the owner of a 2009 Honda Accord whose silver paint gleamed against the stark light cast from the industrial buildings large, overhead bulbs. Mejia is in his first semester as a City College student and brought his car into class for a transmission fluid change.

“It has over 140,000 miles since the last change. That’s no good. Needed to be changed at 100,” said student Juan Carlos Herrera as he stepped beneath the looming car to assist.

Hoisted high on a lift sat Mejia’s Accord where instructor Gagliardi was demonstrating for the class how to remove a particular bolt in order to release a gush of black cherry colored fluid from the belly of the engine. Fog clouded the safety glasses of the on-looking mechanics that instead of taking notes and flipping through the pages of a book, wore gloves and held wrenches and shop-lights.

With a few jolts, a thump and a twist the bolt was removed. “And there it is,” said Gagliardi as the transmission fluid continued a steady downward stream into a bucket held by Mejia. “That’s going to take a minute,” he added.

In a haste the instructor left the Accord and walked from the lift until hovering over a grey 1997 Buick Lesabre “Custom,” added its owner Curtis McEldry, 37.

McEldry brought his Lesabre because he noticed water leakage during the week courtesy of the heavy April showers in San Francisco this year.

“You have to take all this out and get some liquid rubber,” Gagliardi said to McEldry while analyzing the repair.

“Some what,” McEldry asked inferring what to get at the store.

“Liquid rubber, from the store. You know? It comes in a tube and you just squeeze it here,” said Gagliardi while running his finger down the length of the windshield where the glass met the chassis.

“Yeah, yeah. In a tube, alright. I’ll get it for next class,” McEldry said.

“All you do is let it set for a while and you’ve done it,” Gagliardi finished.

Removing himself the instructor went back to his work on Mejia’s Accord. Having remained busy, Mejia along with other students had completed putting the bolt back on and were ready for Gagliardi to check their work.

After getting Gagliardi’s approval the class watched the car drop down slowly, the intrusive sound of the lift subsiding after the tires hit the pavement.

Aiming to complete the job students worked together replacing the fluid, holding the light and funnel. “You put it all in yet brother man,” McEldry asked Mejia.

“Go ahead and start it,” Gagliardi said and following his instructions the engine roared to life.

“Put it into reverse. Now, put it into drive. Go forward. Go back,” he directed.

Class dismissed late that night but not after having helped the grease stained students obtain a grade while learning to service their own vehicles. “I believe that learning should be fun and that the best way to learn is through hands-on experience,” Gagliardi said.

Mejia and McEldry left their classroom that evening in a fashion unbeknownst to most City College students, with their instructor seen waving goodbye in the rear view mirror. 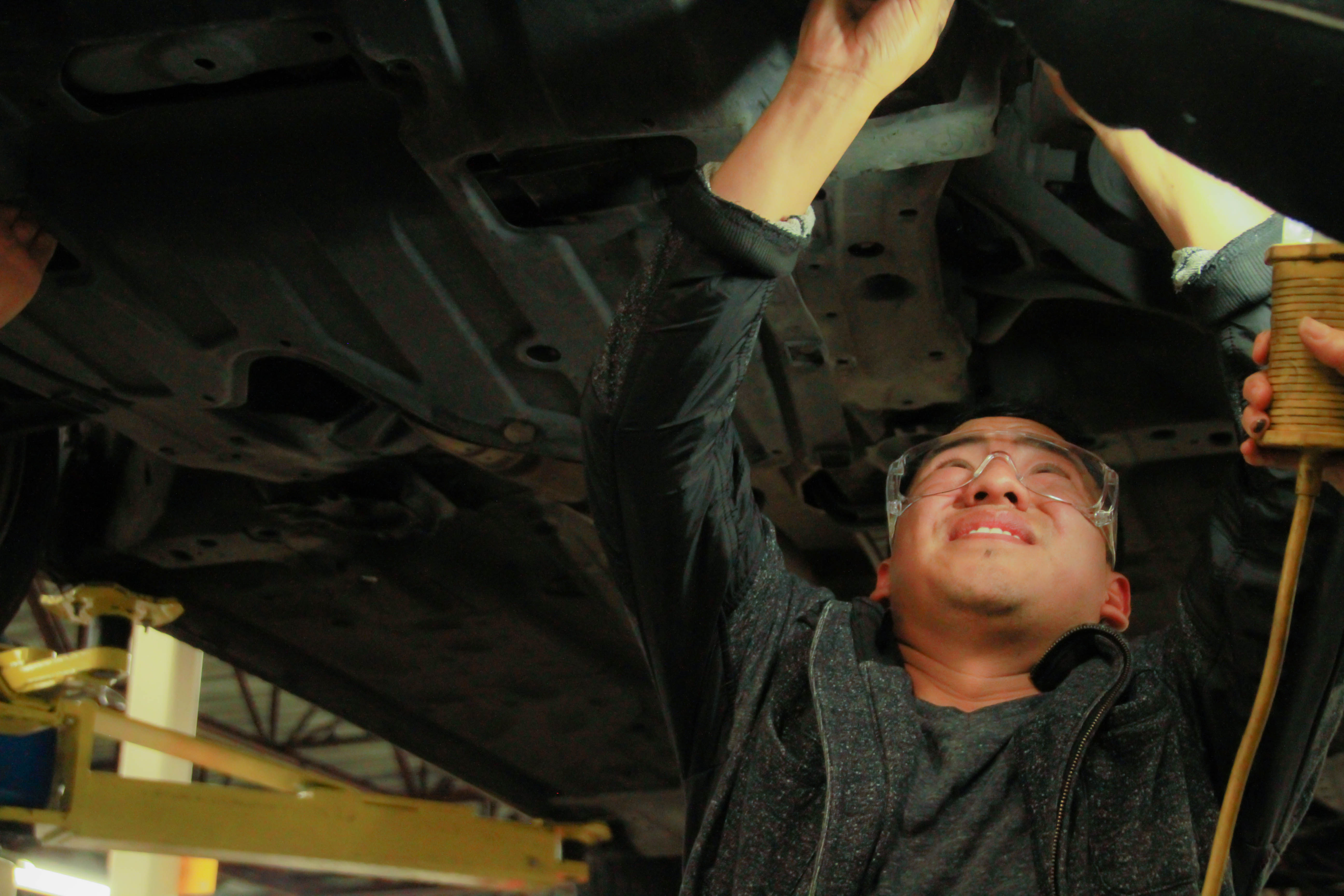 Byron Mejia, 28, works on his car at the City College Evans Campus during an automotive course that teaches students basic auto maintenance. Photo by
Karen A Sanchez/The Guardsman

One thought on “Put it into drive”