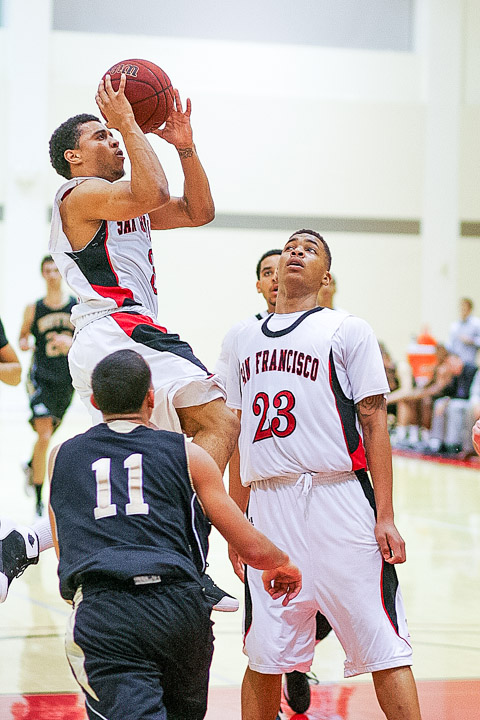 City had a rough start with trouble hitting the long shots, they scored one out of five three-point shots, while deep shots seemed to be where Butte had the upper edge.

“Same as last game, (we’re) playing too hard in the first half to be only up twelve,” said Rams head coach Justin Labagh. In the “last two games we have won in the last ten minutes.”

City concentrated getting the ball to their big men up front. The 7-foot freshman center Sami Eleraky had six points and dominated on defense with eight total rebounds. The Roadrunners had an extremely tough time scoring because Eleraky kept swatting their shots.

“There was a mismatch at rim, whether driving or posting up.” said coach Labagh.

Rams 6-foot-9 sophomore Center Kanu Aja also had an impressive defensive game. Aja only had four points, but finished the match with eight rebounds. His stature created problems for the shorter Butte players.

The second half featured impressive dunks and alley-oops executed by the Rams.

Sophomore guard Kori Babineaux found sophomore point guard Chuks Iroegbu running toward the basket and and threw an alley-oop pass that met the 6-foot-4 point guard in mid air who scored with a reverse layup.

“That dunk was just hooping,” said Aja, who was all smiles after the game. “Keeps the game fun.”

City’s next game is the state playoff quarterfinals against the Chabot College Gladiators on Saturday, 7 p.m., at Ocean campus.