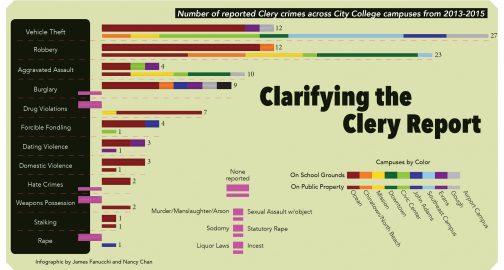 One of the less visible cogs that keeps City College running safely is an Annual Security Report (ASR), which provides criminal offense information involving the Ocean Campus and each satellite campus from previous years.

The report, alternatively known as the Clery Report, is a federal requirement for U.S. colleges and universities with financial aid programs. Campus security authority is responsible for making reports available in print and online to educational communities every October.

Its legal namesake, the Jeanne Clery Act, was passed following the 1986 murder of 19-year-old Jeanne Ann Clery in a Lehigh University campus dormitory.

A total of 163 illegal acts have been reported across nine of City College’s campuses between 2013 and 2015.

Of these, 74 of them happened on school grounds and 89 occurred on public property. The Clery Center For Security On Campus defines public property as “all reasonable public property,” including parking lots, streets and other pathways adjacent to facilities.

ASRs focus on offenses referred to as Clery crimes: among them are manslaughter, sex offenses, intimate partner violence, crimes against property, unlawful acts of prejudice and the possession of drugs or weapons.

The majority of Clery crimes committed at or near City College were opportunistic in nature. Of the recorded cases, 100 are classified as nonviolent, consisting of vehicle theft (39), burglary (8), drug or weapon possession (32 and 17), stalking (2) and hate crime (2).

The other 63 required physical aggression or threat of force toward another person: aggravated assault (14), robbery (35), forcible fondling (5) and intimate partner violence (8). One rape occurred on John Adams campus’ public property in 2014.

Vehicle theft is the most common reported crime. Ocean Campus had 10 cases by itself, and the lengthiest Clery crime record with a count of 79 cases over the three years observed.

City College’s main campus has other distinctions. It is the only campus with incidents of hate crime, domestic violence and stalking.

In comparison, the lesser-known Airport Campus has zero offenses using the same time frame. Only people with permits are allowed inside; the two curriculums taught there are aircraft maintenance technology and fire science.

Civic Center Campus had the greatest number of violations with 14 in 2014, but each arrest made was a special arrest that didn’t involve students.

There have been no killings in or near any campuses.

“Every day officers give me info, and I put it into my daily log,” Gaytan said. “I’m a patrol officer and a sergeant; it’s hard to keep up.

It’s challenging, but for the good of the students and the whole of the college, I get it down,” Gaytan said.

His log is a black Wilson Jones binder, housing typed documents that are sleeved in sheet protectors. Not one paper is out of place to compensate for the many hats he wears.

Gaytan isn’t the first sergeant to act as a Clery keeper. A previous sergeant maintained the same role before he retired.

The latter lacks the power of arrest, but they’ve been sufficient. Smaller areas with a knowing group of watchful eyes are natural crime deterrents.

However, it goes without saying that Gaytan prefers a larger police workforce. His department is understaffed and on the lookout for trainees.

“Ideally we would have 50 officers,” Gaytan said. “Having just one officer without backup or no extra pair of eyes nearby for you…that’s a dangerous situation.”

Furthermore, City College’s art-focused Fort Mason Campus was excluded from the pages. According to the “Our Locations” section of the City College website, Fort Mason had  around 2,000 enrolled students in 2014.

A disclaimer on total crime statistics mentions that “The San Francisco Police Department did not furnish public property Clery crimes statistics for 2015.” Property crimes were not necessarily as low as they appear, compared to 2014.

The 2016 ASR and campus monthly crime cases are accessible online on City College’s website, under the Campus Police section. A physical copy can obtained upon request from Ocean Campus’ campus police office at Cloud 119.