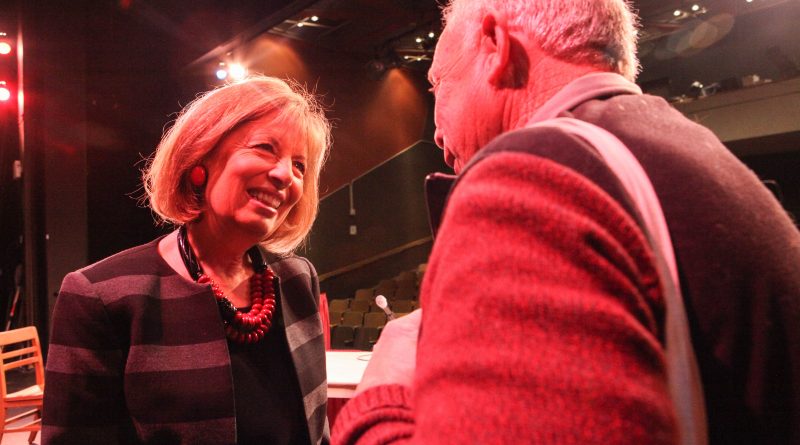 Congresswoman Jackie Speier reaffirmed her commitment to the City College community on Nov. 28 as its accrediting body’s final judgement looms.

“You have been a true and long-lasting friend to City College,” Board of Trustees President Rafael Mandelman said to Speier. “You were our champion through the accreditation crisis.”

After October’s visit from the Accrediting Commission for Community and Junior College’s (ACCJC) visiting team, the college is on edge of what the outcome will be. The commission will meet in January to discuss their final decision, which will be made the following month.

This year, Speier wrote two letters regarding the ACCJC’s “unfair” actions and practices—one for the Secretary of Education on Sept. 9, and the other for the National Advisory Committee on Institutional Quality and Integrity on Nov. 10.

Over 150 students, faculty and  members of the college administration attended the public forum at the Diego Rivera Theatre to tune into the two-panel discussions between Speier, California State Senator-elect Scott Wiener, Assemblyman Phil Ting and several college representatives. The college’s status and the ACCJC were the main topics of discussion.

City College has been battling internal problems since its accreditation crisis; in a five year period, it went from serving approximately 100,000 students to 60,000, according to the data on the college website.

“Our full-time equivalent students, which is the basis for our state funding, for five years was above 35,000,” Mandelman said. “Today, it is 22,000. It’s not dropping at the rate it was dropping, but it is not recovering and is continuing to dip.”

City College is on its last year of the state’s stability funding, and Mandelman added that the college will lose $35 million of its $200 million budget.

“We will be living on reserves for the next four years until our budget meets the money coming in,” interim Chancellor Susan Lamb said in an interview.

Additionally, tensions are rising between the administration and faculty due to the anticipation 26 percent in class cuts.

While there is no data or study that explains precisely why enrollment is decreasing, students and faculty stress their frustration at nearly every Board of Trustees meeting.

“Departments are going to be affected with different percentages, but the fact is they lose classes that are critical to a sequence,” biotechnology program counselor Li Lovett told The  Guardsman at a Board of Trustees meeting. “It could affect students’ ability to transfer to competitive programs, along with important classes that are needed to build skills appropriate for a job environment.”

Tim Killikelly, president of the faculty union AFT 2121, believes the ACCJC played a huge roll in the drop in enrollment.

“All we really ask here from the college is to treat us fairly,” Killikelly said at the forum. “We do better than most institutions when it comes to our primary function which is educating people, and we just want to be treated in a way that will let that work go on––that is critical, and  the ACCJC has not treated us fairly.”

The college is trying to find ways to boost enrollment, and one of those ways is by searching for a public information officer (PIO) to help market the college; it is aiming to hire a PIO in the next few months.

The college may also find relief in the recently passed Proposition W that will make progress toward the college tuition-free, and there are high hopes that it will attract students to enroll.

“This semester at City College, we reached a 25 percent threshold which means  that next semester we should be designated by the Department of Education as a Hispanic-serving institution,” department chair of Latino Studies Edgar Torres said. “We should be leveraging that to bring more Latino students to this school.”

Speier made her exit report by showing appreciation for the college near the end of the forum.

“I don’t question that this is a first-grade institution of higher learning in this state and in this country––you have proven it all today, and it’s our job now to make sure this institution thrives,” Speier said.

One thought on “Congresswoman reassures City College despite internal issues”