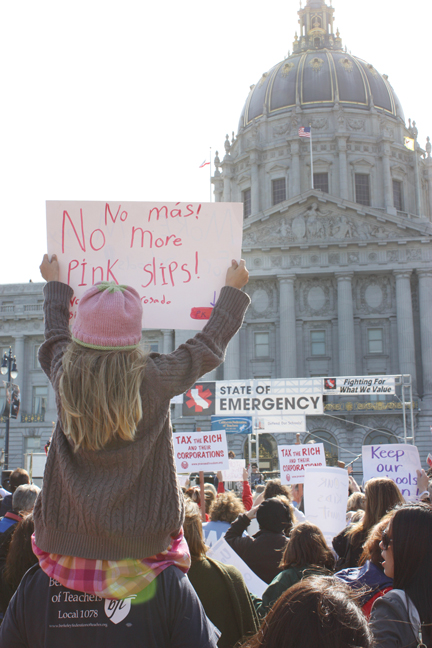 By Essie Harris and Alex Emslie
The Guardsman

Thousands of teachers, students and concerned citizens held protests every day during the week of May 9, calling for Republican legislators to vote for extending temporary taxes that would offset crippling projected cuts to California’s public education system next year.

Gov. Jerry Brown’s revised California budget proposal, released May 16, continues to rely on the extension of temporary taxes that would bridge the remaining $9.6 billion projected shortfall next year. He called on the legislature to pass the taxes, which requires a two-thirds majority, then allow voters to approve them in November.

California Teachers Association union representatives who are lobbying republicans to pass the tax extensions said during the Sacramento rallies that they are close to convincing the four Republicans needed to break the two-thirds threshold in both houses.

“If we get the four votes that we need and just pass it legislatively and get the governor to sign it, then we’ll be okay and 30,000 people won’t lose their jobs,” CTA President David Sanchez said. “Class sizes won’t be impacted, and we can then spend time talking about the real solutions to tax inequities in the state of California.”

Budget nuts and bolts
If approved, Gov. Brown’s proposed extension of the 2009-10 personal income tax surcharge would create $2.5 billion in tax revenue. Under Proposition 98, which sets the minimum level the state must fund public education, more than $2 billion dollars of the revenue would go toward K-12 schools and $350 million to California Community Colleges.

The temporary taxes will expire if legislators don’t extend them by the beginning of the next fiscal year on July 1, and the state will have to make up approximately $10 billion by cutting money from state departments including education.

Legislators sometimes decide not to fully fund the minimum Prop 98 guarantee, which creates a debt the state owes to its education system. The debt, called a “maintenance factor,” currently stands at approximately $9 billion, according to Brown’s budget revision. Brown said passing the tax extensions would allow the state to pay down some of the debt, but if the extensions are not passed, the maintenance factor would instead increase.

Brown refused to speculate on what the state would do if the taxes are not extended.

“I’m not going to give the Republicans a road map to ruin,” Brown said in response to questions about a contingency plan. “I’ve given them a road map to success.”

Sacramento
More than 1,000 people crowded the south steps of the Capitol in Sacramento May 13 to close the week of protests and lobbying organized by the California Teachers Association.

The week of protests dubbed “State of Emergency” by the CTA included two civil disobedience actions. Police arrested 65 people for trespassing on May 9 after protesters marched inside the Capitol and refused to leave, according to a report in the San Francisco Chronicle.

CTA members occupied the Capitol a second time on May 12, resulting in 27 arrests.

“We showed as educators that we are willing even to go to jail to get what needs to take place in this state in order to provide the best possible education for all of our students,” Sanchez said, adding that California Highway Patrol officers treated him with the “utmost respect.”

Students arrested during the May 9 protest reported a less pleasant experience.

Sacramento City College student Simon Hyatt and SF State student Terence Yancey said police treated them more violently when they were arrested on May 9. The students thought the CTA should have sent a stronger message and occupied the Capitol with more people.

“We had heard that this week was going to be like a Wisconsin-style occupation of the Capitol, and we’re incredibly disappointed with what we’ve seen,” Hyatt said.

Ed Foglia, president of CTA’s retiree chapter, said California’s public education system was ranked among the top five in the nation when he was in school.

“Now California schools rank 43rd and dropping because of this illogical way of doing business,” Foglia said. “I want my grandchildren to have the same opportunity for educational success that my children and I had when going to California schools.” 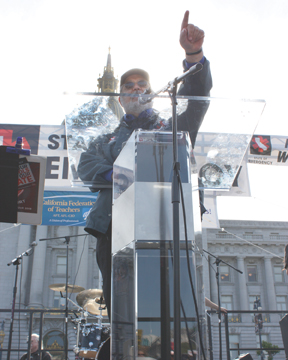 San Francisco
Budget cuts to essential public services brought roughly 1,200 educators and other members of the community to Civic Center Plaza on May 13 to raise awareness and urge legislators to extend existing temporary taxes.

Hundreds piled out of the Civic Center BART station chanting “We are one” at 4 p.m. on May 13, their shouts in sync with a man playing his broken violin at the bottom of the stairwell.

When there were financial shortfalls in the past, teachers would settle for health benefits in lieu of pay increases, third grade teacher Elin Hansen said. Now they are getting neither, she said.

“I’m 61, I am not planning to retire for another 8 years.” Hansen said. “Now I don’t know if I will be able to afford retirement.”

The drastic cuts have also affected classified staff. According to the Education Coalition, 57,500 non-faculty employees were laid off in the 2009-10 school year and the numbers continue to increase.

San Francisco Unified School District nurse Julie Rosenfelt said there should be one nurse for every 750 students. The ratio currently stands at one for every 2,000.