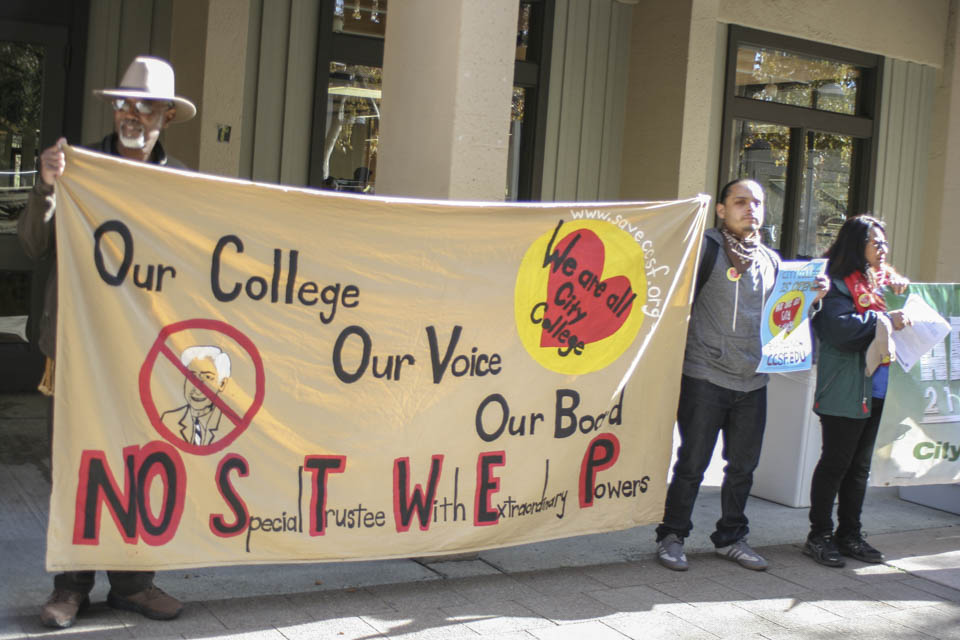 The plan, titled “A Plan for Returning City College of San Francisco to Local Control,” reviews the Board of Governors reasons for giving Special Trustee Robert Agrella extraordinary powers in July 2013, a state takeover of City College that has left the locally elected Board of Trustees powerless.  Harris noted the outcome of the lawsuit brought by San Francisco City Attorney Dennis Herrera against the Accrediting Commission for Community and Junior Colleges could significantly change or eliminate the plan.

The plan states that the college must have a functioning local board in order to meet accrediting standards and that, as milestones are met, control will gradually be returned to the local board.  The plan states that, if City College is granted restoration status by ACCJC in January 2015, full control of the college will be returned to the Board of Trustees no later than July 1, 2016 and that progress by the local board could accelerate the process to no less than nine months.

The Nov. 17 meeting was the first reading of the proposed plan.  A contingent of City College students, staff, faculty and concerned citizens protested prior to the meeting and then more than 20 made public comments to the Board of Governors during the meeting, all in favor of reinstating the Board of Trustees in a more timely fashion than the timeline outlined in the plan.

During her public comments newly elected Trustee Brigitte Davila said they are looking forward to steering City College over these rough shores and she doesn’t see why it would take longer than nine months.

“We lost 35,000 students because of the idea that City College is going to close any day now,” Trustee John Rizzo said. “Returning the board to power would demonstrate to our students and prospective students that they don’t have to worry.”

“Eighteen months is just way too long.  There is no way that should happen,” Killikelly said.

Student Martin Madrigal said to the Board of Governors, “Discard the draft proposal and immediately restore the Board of Trustees and abolish the special trustee.”

A member of California State Assembly member Tom Ammiano’s staff read a letter from Ammiano to the Board of Governors.  Referring to the 18 months the Board of Trustees have already been suspended and the timeline for reinstatement it read, “There is no justification for suspending public oversight of this district for this length of time.”

“It may not be what the community here would like to see, but it’s an orderly process with milestones,” member Cecilia Estolano said. “It’s an action plan that we can hold our Special Trustee accountable to.”

Estolano requested a status update from Agrella at the January meeting of the Board of Governors.

Member Scott Budnick asked Chancellor Harris, “If the locally elected board … can move mountains in a few months, this could be expedited to this summer to be ready for fall semester?”

Harris said the timeline will be determined by the trustees and their ability to develop with the special trustee the as-yet undetermined milestones for the restoration of the trustees authority.

At the next Board of Governors meeting set for January 20-21, 2015, in Sacramento, the board will receive updates from Agrella on what major points remain for City College to retain accreditation and further discuss the plan to reinstate its Board of Trustees.