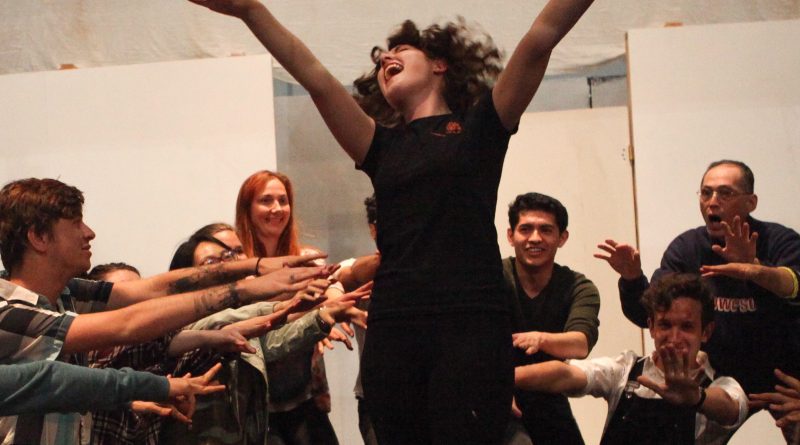 Special to The Guardsman

The City College theatre department will open the stage production of the broadway musical “Drowsy Chaperone,” on April 13 at the Diego Rivera Theatre.  It runs through April 22.

Rehearsals for the play are currently taking place at the theatre and is directed by theatre arts instructor Deborah Shaw.

Shaw is a veteran of the stage with years of performing, directing and choreographing under her belt. She has taught theatre arts at City College for 31 years.

Shaw first saw “Drowsy Chaperone” live when it came to San Francisco sometime in 2011, four years after it ended its debut run on broadway. She ultimately decided to choose the play for the spring performance not only for its recency, but also for its message.

“The Drowsy Chaperone is very much a comedic musical, poking fun at the musicals of the 1920s and 1930s. I lean towards doing happier plays to make the audience feel good watching the performance and ultimately have a good time,” Shaw said.

Shaw knows just what goes into being part of a stage production. Shaw and the other cast members acknowledged that there are multiple obstacles that can make or break the production as a whole.

“Finding talent is a big challenge. We have 23 people in our cast, 13 feature performers and 10 chorus members. They’re a mixture of people who have never performed before and veterans who have performed in multiple shows. Also, our theatre budget was cut over the years so we have to keep that in mind as well,” Shaw said.

Shaw isn’t the only one who dealt with challenges during production.

Tom O’Brien is a former City College student who is currently the stage manager for the program. O’Brien has worked in and out of multiple theatre departments for two years and is currently a set and prop designer for the play.

O’Brien, like Shaw, not only has to deal with cast size, he also has to work with a technique called “projected mapping,” which is the newest addition to the theatre department’s tech lineup. How it works is that a display surface on stage is painted in all white, so that a projected background can be visible to the audience and performers.

“It’s not my first time using a projected screen, as it was first used in our production of ‘Anon(ymous)’ last fall. Ultimately it depends on the play itself whether the projected screen is used or not,” O’ Brien said.

Local plays like what City College puts on every semester attracts talent from not only around campus, but also from around the Bay Area.

Jesse Northen is a student enrolled at San Francisco State University. He has spent one semester working with the theatre department, and is playing the character of Robert in the production.

While he personally sees community theatre as a hobby, he sees the benefit in working at this level of theatre.

At the end of the day, Northen wants the crowd to have a good time when they watch the performance.

“I really want people to laugh at how cliche the show intentionally is. It’s a unique show, and I hope people will catch on to that,” Northen said.

Tickets are $15 for the public and $10 for City College students and staff. They can be bought at the door or online at drowsychaperoneccsf.brownpapertickets.com.