Both a teacher and a music producer, his latest album is nominated for a Grammy

By Jen Verzosa
The Guardsman

By 9 p.m. on Mission campus, the cavernous classrooms are vacant with the exception of room 162, where Music 25: Music of Latin America and the Caribbean is taught.

Course instructor Gregory Landau—currently nominated for his sixth Grammy—erases his lecture notes from the white dry-erase board as straggling students slowly exit the classroom.

Landau packs his bag, then strolls down Mission Street to BART to go home.

No glitz, no glam—not the nightlife you would expect from a Grammy-caliber music producer.

Landau, 57, remains close to his humble beginnings in the music industry, which are strongly rooted in the Mission District.

“I used to go to Dolores Park on the weekends,” Landau said. “There were drummers and jazz and Latin music and all kinds of things going on in San Francisco. And the psychedelic music and Santana. All [of] this really influenced me.”

Upon graduating from Mission High School, he toured the United States and Canada for two years in the band Zorro as a guitar player.  One of his bandmates was Arcelio Garcia, the lead singer for the popular Latin rock group Malo.

Landau then began to study at the University of California, Berkeley, with a Brazilian folklorist named Paolo de Carvahlo Neto, who introduced him to the study of methodology and conceptual aspects of Latin American music.

Throughout the 1980s, Landau lived in Nicaragua. He played music, did radio and conducted folkloric research.

When he returned to the United States, Landau’s academic focus shifted.

“I decided I wanted to study more about the essence of music and the role of music as a social force,” Landau said.  “And the way music actually impacted lives and penetrated their consciousness.”

In 1999, Landau earned his doctorate in Communication from the University of California, San Diego.

As of late, Landau rarely performs. He now focuses more on teaching and producing. This year, he is nominated for a Grammy for producing “Sembrando Flores” by young Son Jarocho masters, Los Cojolites, in the Best Regional Mexican Music Album (Including Tejano) category. 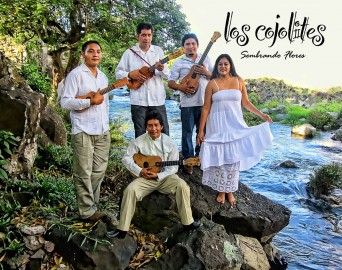 “[“Sembrando Flores” was produced] on my own label, [Round Whirled Records]. This was done with no budget, basically. With no support. Basically, our own work—partnering with the artists, artists we believed in,” Landau said with pride.

On “Sembrando Flores,” the percussion of the quijada (the jawbone of a horse struck on the side to generate a rattling sound) and the tarima (a wooden platform played by dancing on it with wood-bottomed shoes) are showcased, along with stringed instruments that the group members hand carved and created themselves.

With electrifying energy, Los Cojolites challenge the boundaries of Son Jarocho (a regional folk music style from Veracruz, a Mexican state along the Gulf of Mexico) while remaining true to tradition.

“It feels great to be recognized by your peers because the Grammys is not a popularity contest. It’s people recognizing the artistic merit,” Landau said. “Justin Bieber doesn’t do well in the Grammys, and Lady Gaga didn’t too well because people who were more adventurous artistically would win out.”

The Grammys will air on Feb. 1o.