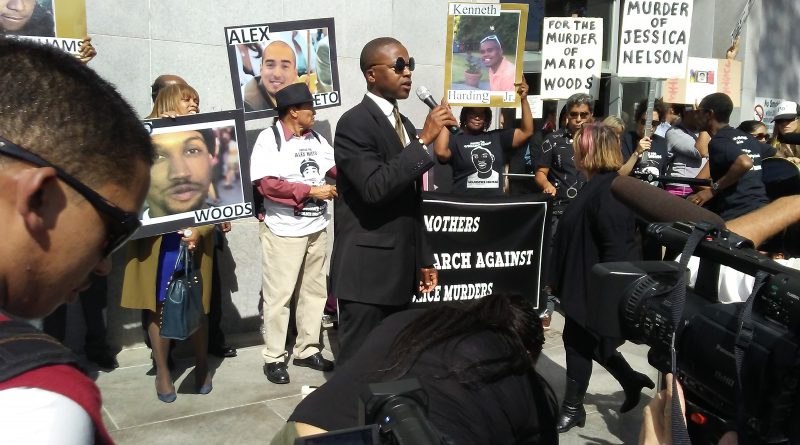 Hed: Families of those slain by SFPD rally in front of Hall of Justice

Chants for justice rumbled outside San Francisco’s Hall of Justice on Oct. 7 as the families of six slain civilians demanded a meeting with District Attorney George Gascón.

Community organizers called for police to have unpaid leave during the investigations of the shootings as well as imprisonment of the officers involved.

“We are not here to beg. We are here to make a demand,” said Elaine Brown, chairman of the Black Panther Party. “We demand that Gascón comes out of that office, stops playing around and charges these officers with the murder of Mario Woods.”

One by one, each family member took the microphone. They emphatically voiced their concerns and frustrations with the San Francisco Police Department (SFPD) in front of approximately 100 people.

Gwen Woods, the mother of Mario Woods, addressed the crowd to condemn the five officers involved in the incident that left her 26-year-old son dead.

Her son was shot 20 times by SFPD officers on Dec. 2, 2015 after being allegedly held as a suspect for a stabbing incident in the Bayview neighborhood.

“I wish they would have had a little compassion for my son,” Woods said. “I have to remind you–we are not animals.”

Other family members took the opportunity to voice their sadness over the police shootings, including Elvira Nieto, the mother of Alex Nieto.

“Fifty-nine bullets; 59 times he was shot. We cannot say it was nothing,” she said with the assistance of a translator.

Nieto, along with her husband Refugio, have recently called for a memorial to be constructed in honor of their son. The city has yet to approve any permanent memorial for Alex Nieto.

Progress was made earlier in the day for Luis Gongora, a 45-year-old homeless man who was killed by SFPD officers last April. The family’s attorney Adante Pointer announced that a federal civil rights lawsuit was filed in order to bring justice to the family.

“We are not asking [police] to go above and beyond. We want our police departments to simply honor their oath,” Pointer said.

The San Francisco attorney’s office refuted their claim, saying that the incident’s lethal force was “necessary and legally justified.” Sgt. Nate Stegar and Officer Michael Mellone claimed that Gongora had lunged at them with a knife.

“The police killed him in less than 30 seconds as he laid on the floor,” said Gongora’s cousin, Luis Poot Pat, who spoke with the help of a translator. “We are only asking for justice.”

Following the rally, members of numerous social activism groups funneled into the Hall of Justice in an attempt to meet with Gascón.