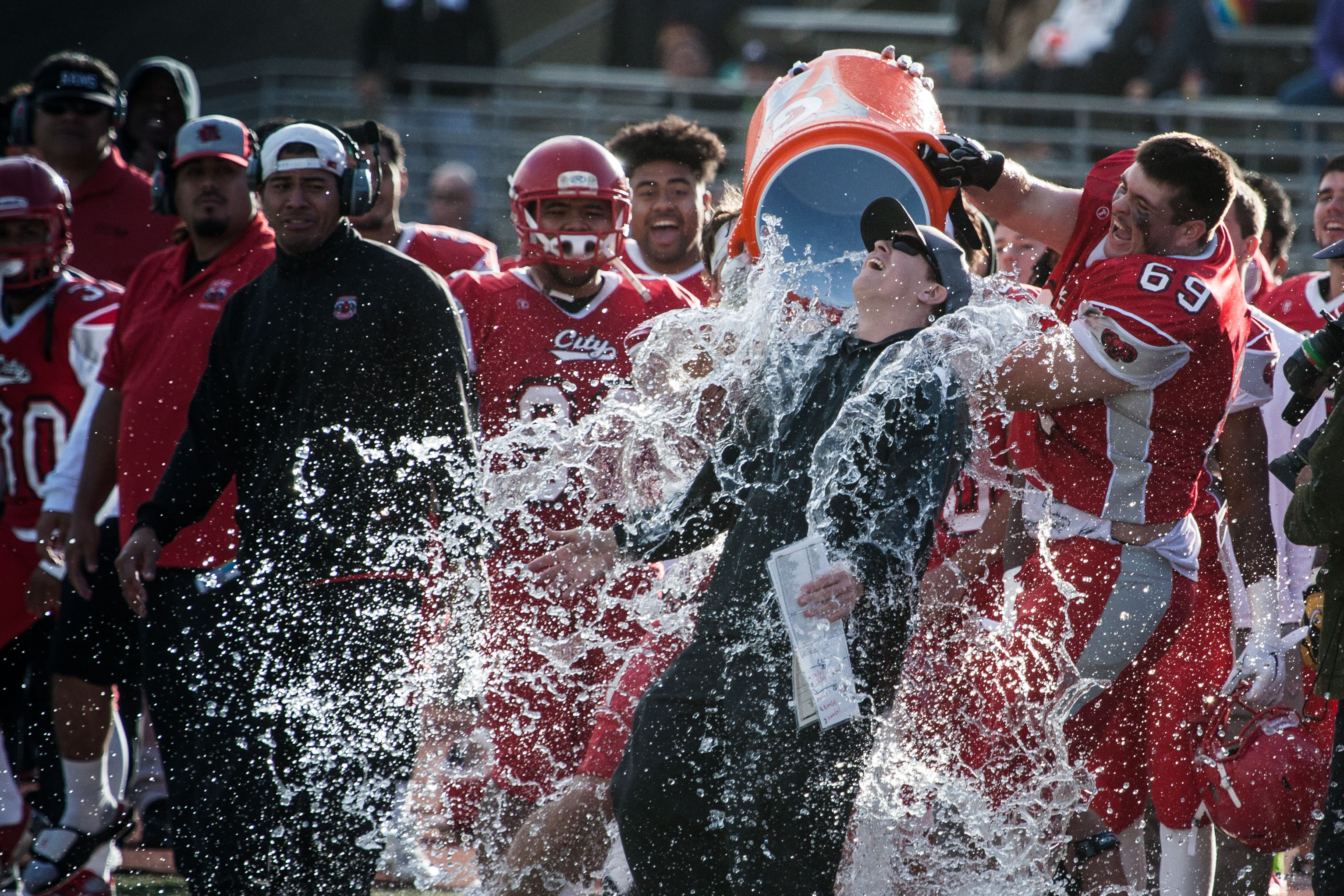 Among the loudest Rams supporters was Lester Turner who was seated in the front row of the bleachers. Turner hasn’t missed a City College home game since 1994 and he was in the stands when the Rams won their last championship at home in 2011.

He is known for his signature chant that can be heard echoing throughout the stadium during games. “Everybody hit somebody, don’t let ‘em score” is what Turner could be heard bellowing during Rams games.

“Defense is keeping us in the game,” said Turner during the second quarter when the Rams held a slim 6-0 lead.

“I’m very optimistic we’re going to win,” said Eason, whose daughter Kamilah grinned proudly as she watched her father’s team score another touchdown to bring the score to 13-0 in the Rams’ favor.

Even among fans without family ties to the Rams team, excitement and optimism reigned supreme among football fans.

“This is our Super Bowl,” said Mario Guardado, brother of City College English instructor Ben Bacsierra. “This is San Francisco. This isn’t Santa Clara. This is grassroots football.”

The optimism and positive energy from the fans helped propel the Rams to a 26-14 victory over the Saddleback Gauchos. The Rams also swept post-game honors with quarterback Anthony Gordon earning the Most Outstanding Offensive player award and linebacker Nick Pierotti was selected as the Most Outstanding Defensive player. But the game’s Most Valuable Player award went to Rams runningback Namane Modise.

Following the game, Modise said that having to unexpectedly step up and fill an important role for his team–the role normally played by the injured Elijah Dale–benefitted his own game.

“It was pressure on me when I was hungry,” Modise said.

The humble Modise absentmindedly set aside his new trophy when asked to pose for post-game photographs. He looked elated and a little shocked to be a champion and he admitted he wasn’t anticipating taking home the MVP award.

“I didn’t expect this, not at all,” Modise said. “But it’s football at the end of the day. I’ve been playing since I was a kid. It’s all my hard work paying off.”

Modise lost his father and was raised by a single mother, which also served as motivation for the freshman from Castro Valley. “This means everything to me. Everything.”

This is the first championship for the Rams without longtime head coach George Rush at the helm. While many of his former coaches remain with the team, the pressure was on first year head coach Jimmy Collins and his team to uphold the tradition of excellence set forth by Rush.

“There was more motivation to work hard and make sure nothing was left to chance,” said men’s athletic director Harold Brown.

The challenges on the field were also compounded by the attention surrounding accreditation issues faced by the school itself.

“It’s so nice to know that coaches, players, trainers, and the administration fought through it and somehow managed to keep everything going to win a state championship,” Brown said.

That commitment and work ethic extends beyond just the Rams players and staff. When asked if a season of sacrifices her family has made — time, energy, and long practices — was all worth it, Kalah Eason beamed proudly.

“Yes, it definitely was now that they won the championship,” Eason said. “It was hard because of the time and everything else that went into it, but it’s definitely worth it.”

Despite her calm, collected facade in the stands, Eason admitted to being a little bit uneasy as the game wore on.

“I was kinda nervous with the low score — I mean I knew we were gonna win, but I just thought we were gonna put more points on the board,” she said.

Hugging her daughter Kamilah, who was so excited about the win she could barely keep her tiny body still, Eason went on to explain what her husband Jean’s win means to her family.

When asked how the Eason family will be celebrating, Kalah smiled proudly as she looked on at her husband celebrating with his teammates.