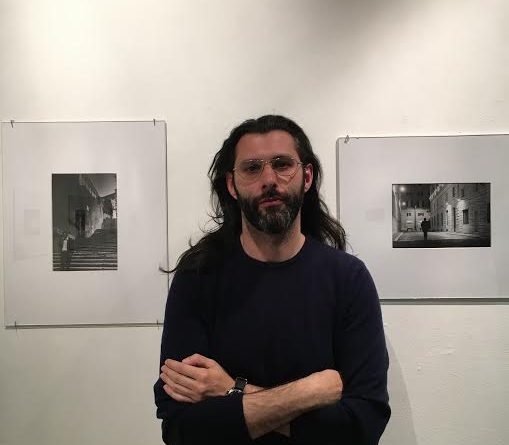 Jazz songs of Kurt Rosenwinkel played while observers walked from image to image, sipped wine and nonalcoholic beverages and snacked via the provided charcuterie board.

Hung on the stark white walls of Gallery Obscura is a collection of ten street photographs from Mancini’s October 2016 trip to Rome, Italy. A showcase entitled “Rome Noir Series.”

According to a labeled gallery wall Mancini’s objective was to “give importance to moments that usually go unseen from the viewer that they deserve but with a touch of noir, like an old black and white movie.”

Mancini described his visit to Rome like it was yesterday. He recalled roaming within a half mile of the central and historical areas such as Campo Del Fiori and Piazza Navona, accompanied by his Fuji X-Pro 1 camera and 35mm and 50mm lenses. Mancini took to the streets both in day and night.

“Italians are accommodating if you play the tourist. Other times you have to wait for the moment,” Mancini said as he stood in front of one of his photographs. The subject was focused on an older man smoking a cigarette while looking down cleaning vegetables at the farmer’s market.

And sometimes he needed to rest, Mancini added. He pointed to another photograph of an older man who was in mid-walking action through a narrow cobblestone street. “I just waited for someone to walk by and I got the the shot,” he said.

Although the particular European locality of his photographs may not be easily recognizable, Mancini’s noir theme is indefinitely mysterious to the observer.

The towering buildings with exposed pipes, narrow cobblestone streets with scarce lights, single subjects with focused expressions, multiple subjects and shadows passing through on a stroll all combine to deliver a melancholy consciousness about his photographs.

The uncertainty of each photograph’s location gives Mancini’s audience a good reason to question exactly how long he explored the city during his night walks.

“I like black and white because of the tough contrast,” Mancini said.

With no placards or caption to describe the photos in his gallery, Mancini said he prefers it that way. “Leave it to the picture. You see it, you can imagine. I prefer to give the observer the idea and let them wonder,” he said.

“Rome Noir Series” is held from Mar. 23 to Apr. 22, 2017 at the Gallery Obscura in City College Ocean campus and available for all students to come and enjoy.