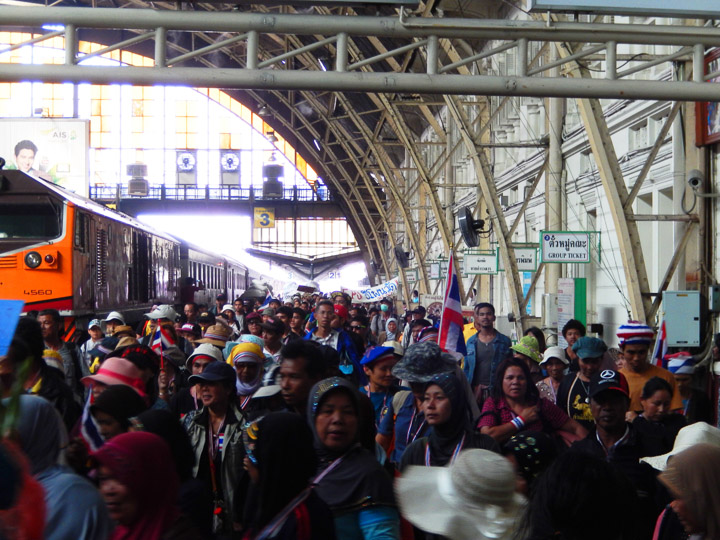 Culture shock is a strange feeling. It consists of realizing how very different you are from the surroundings in which you have stepped into. Thailand was a culture shock for me.

I knew before I left that I did not want to follow the heavily-carved path. That kind of traveling was not in my nature. Instead, I focused my time on retreating into countrysides and places where tourism was not a factor.

For most of my trip I found myself taking the road less traveled and ignored men who waited at train platforms to hustle the foreigners into all sorts of tourist traps.

Taking local taxis consisted of jumping in the back of large trucks with makeshift seating. Usually, women carrying big bags of groceries, who smiled and stared directly at my tattoos shared the back of the truck with me.

During times when I was fearful of my surroundings, at moments when I realized I was the only foreigner in an entire town that spoke no English, I smiled.

I smiled and Thailand smiled back.

Everywhere you go in Thailand, large ornate pictures of the king hang on walls and street corners. Calendars of the king and even desks where you can write to the king clearly illuminate the country’s love for him.

Thailand is unlike America, where there is constant dispute over the president and his policies. There, there is no question. The king is best.

This does not come from nothing. Bhumibol Adulyadej, king of Thailand, has given the people of Thailand hope. He has brought money into the country’s schools and has been very diligent in working with charities and making sure that his country is looked after.

With ongoing protests in the region, this might alarm some people and raise the question ‘what is the protest about then’?

Prime minister Yingluck Shinawatra is who the people of Thailand are protesting.

Shinawatra has tried to pass bills which would expunge her brother’s and ex-prime ministers’ charges and erase murder charges for other politicians.

The first time I saw the Thai protest was in the Hua Lamphong Train Station in Bangkok. It also happened to be the first time I tried to use a public bathroom in Thailand, but that’s another story.

After leaving my bags with Jess, one of my travel friends, I ventured to find the bathroom and on the way suddenly noticed the entire train station was quickly filling with people. The crowd became so dense I jumped on top of a wall platform to try and see over it to find a way out.

Looking over the heads of hundreds of walking and chanting demonstrators and lines of police, I realized I had happened upon the thick of the protest. Instead of worrying about my security like a rational human being, I did what any journalist would do and pulled out my camera and shot the scene that unfolded.

The feeling in the air was tense and powerful but not violent. The demonstrators marched slowly past the police and chanted loudly. But no one on either side took it too far. Everyone was respectful, especially near the monks who sat in the ‘Reserved for Monks’ section of the train station.

There is something beautiful and unique in the way that Thai people live their lives.

Shortly before New Years, I prepared myself to enter the world of Buddhism. But nothing on this planet could prepare me for what was about to come.