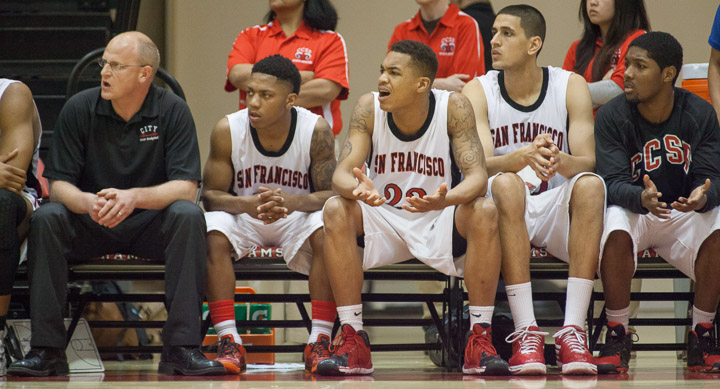 City College was only one victory away from taking a trip to sunny Southern California and participating in the California Community College Athletic Association Final Four, but a heartbreaking 101-94 loss to Chabot College on March 8 upset any chance of that happening.

The Rams were riding an impressive 28-game winning streak, and had made mostly easy work of their two previous opponents, San Joaquin Delta and Butte Colleges.

City College finally met their match against Chabot, with the visiting team matching the Rams in both skill level and athleticism.

The game was a raucous affair from the tip-off until the final buzzer.

Chabot fans stomped their feet in the stands and cheered loudly. Although greatly outnumbered by Rams’ fans, they were able to make the game seem like it was being played at a neutral site instead of City College’s home court.

“The crowd played a big role,” Chabot point guard Leo Smith said. “I’m the hype guy, and when I (was) on the court I could just feel it.”

Rams head coach Justin Labagh was disappointed after the loss.

“It just sucks. We played good at times, but we didn’t shoot well and that really hurt us,” Labagh said. “At times tonight we just weren’t in sync.”

The game began very slowly for both teams and it took over a minute for either team to get points on the scoreboard. That was unusual for City College, who often began games scoring first and taking an early lead throughout the season.

Sophomore guard Dulani Robinson was able to score first for the Rams, and also led the team in scoring with 31 points.

Playing in his last game for City College before he heads off to Pacific University next year to continue his college career, Robinson put on a one-man offensive clinic.

His game play style reminds one of Allen Iverson, a scoring point guard that can still deliver in the assist column, and although small like Iverson, never afraid to back down from an opponent.

He was able to drive to the hoop at will and score points in transition all night.

Robinson had multiple flashy plays, but his biggest highlight came 10 minutes into the first half.

Robinson made a quick steal from talented Chabot point guard Smith and then instinctively threw a half-court Hail Mary pass to teammate Kori Babineaux, who caught the pass near the basket with a defender trailing him. Showing great awareness after catching the pass, Babineaux slowed down on a dime, let the defender speed past him, then made a simple layup.

Although he had a great individual game, Robinson was visibly upset after the game with his team’s loss just shy of the finals.

“Nothing to say,” Robinson said. “We predicted that we would win it all, and to come up short just hurts. We didn’t play up to our capabilities.”

Chuks Iroegbu was the Ram’s second leading scorer with 21 points.

Iroegbu was able to score in a plethora of ways.

The backcourt presence of Iroegbu and Robinson was a critical factor in the game. If not for the two of them, the game would have had a much more lopsided score.

Chabot’s team was led by star point guard Smith. The freshman averaged over 11 points and four assists a game this season, according to the CCCAA website.

Smith acknowledged after the game everything his team had done to beat the vaunted City College program and halt their 28-game winning streak.

“My team put in the work. Hard work pays off in the end,” Smith said. “All week we’ve been just working hard in the gym. We’re just a work in progress, we’re still not finished. The game plan was just to play hard. Defense wins championships, offense wins games.”

Smith has excellent ball-handling skills, and utilized a killer crossover dribble multiple times that helped his team win the game. Like City College’s Robinson, Smith, although small, is able to drive into the lane and put the ball into the basket and doesn’t back away from larger players.

Despite coming up short of their goal of winning the CCCAA Men’s Basketball championship, City College’s season has been a success on some level.

The Ram’s finished 29-2, winning 28 straight games stretching back to the second game of the season when they lost to Yuba 81-78 on Nov. 9 of last year.

The Rams are losing many of their star players, including all of their sophomores and even some freshmen, including star Sami Eleraky, who is transferring to Pacific University along with Robinson.

The team might be losing a lot of talent, but with an experienced coach in Labagh and being in a major metropolitan area, City College hopes to restock and be able to challenge for a championship run next season.