By Lucas Almeida
The Guardsman
After missing most games last season due to severe jaw and knee injuries, you could say the City College men’s soccer starting goalkeeper is a warrior.

Martin De La Torre, 21, is a passionate mechanical engineering student and dedicated athlete who went above and beyond to join his teammates this year in their fight for the California Community College Men’s Soccer State Championship title.

The six-foot tall Rams’ goalkeeper was one of the leaders of this year’s team.  De La Torre started almost every game and ended the season as the second ranked goalie in the state after allowing only 13 scores all season.

“Sid,” as his teammates and coaching staff call him, is De La Torre’s nickname because of his  similarity of appearance to the giant, animated ground sloth from the movie “Ice Age.”

De La Torre has been at City College for four years.

In August 2010, De La Torre faced the first serious injury in his soccer career after breaking his jaw while playing for his club team, Hayward Morelia Football Club. The severe fracture forced De La Torre to sit out that season for the Rams.

It took him eight months to recover and he had to wear a protective helmet during those months.

After recovering from the setback, De La Torre followed a disciplined treatment plan prescribed to him by doctors and athletic trainers so that he would be ready to play his second year of soccer in Fall 2011.

While playing against Foothill College, he injured his right knee.

“I felt my knee lock, just completely lock,” De La Torre said. “I tried to get back up, I got mad. I kind of kicked and punched the post and then I went down because of my knee, I was in so much pain.”

Initial recovery for a torn medial meniscus takes up to two weeks, followed by physical therapy, according to the Cleveland Clinic’s website, but total recovery can take up to six weeks.

De La Torre had to watch from the sidelines as his teammates played.

Then in May, just as preseason training was winding down, he injured his right knee again—this time on the opposite side of the meniscus.

It was his third injury in two years.

“It kind of made me think that I didn’t work hard enough to rehabilitate my knee the same,” he said. “I was trying to do a little extra work just to build on the knee, to get it stronger and ready for the [fall] season.” 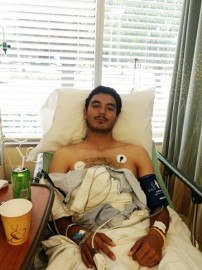 Despite the setback, he never thought about giving up and ended the 2012 season ranked second in the state.

“Well, now all of my friends are just looking at me and going ‘wow, that’s a hella of a comeback,’” De La Torre said.

With De La Torre on the pitch, the City College men’s soccer team made it to the State Championship finals this semester for the first time in Rams history, with a final record of 19-1-4.

Even though they lost 2-0 to the Mt. San Antonio College Mounties, De La Torre was still proud of his personal accomplishments and grateful for a chance to compete with his teammates.

“It means alot to me, I’m very proud to be here,” De La Torre said, sobbing after the game.

Head Coach Adam Lucarelli was proud, too.
“I think we are very fortunate to have a goalkeeper of Sid’s caliber,” Lucarelli said. “We worked really hard […] Going undefeated until this final game wasn’t a bad job. I’m proud of them [all].”