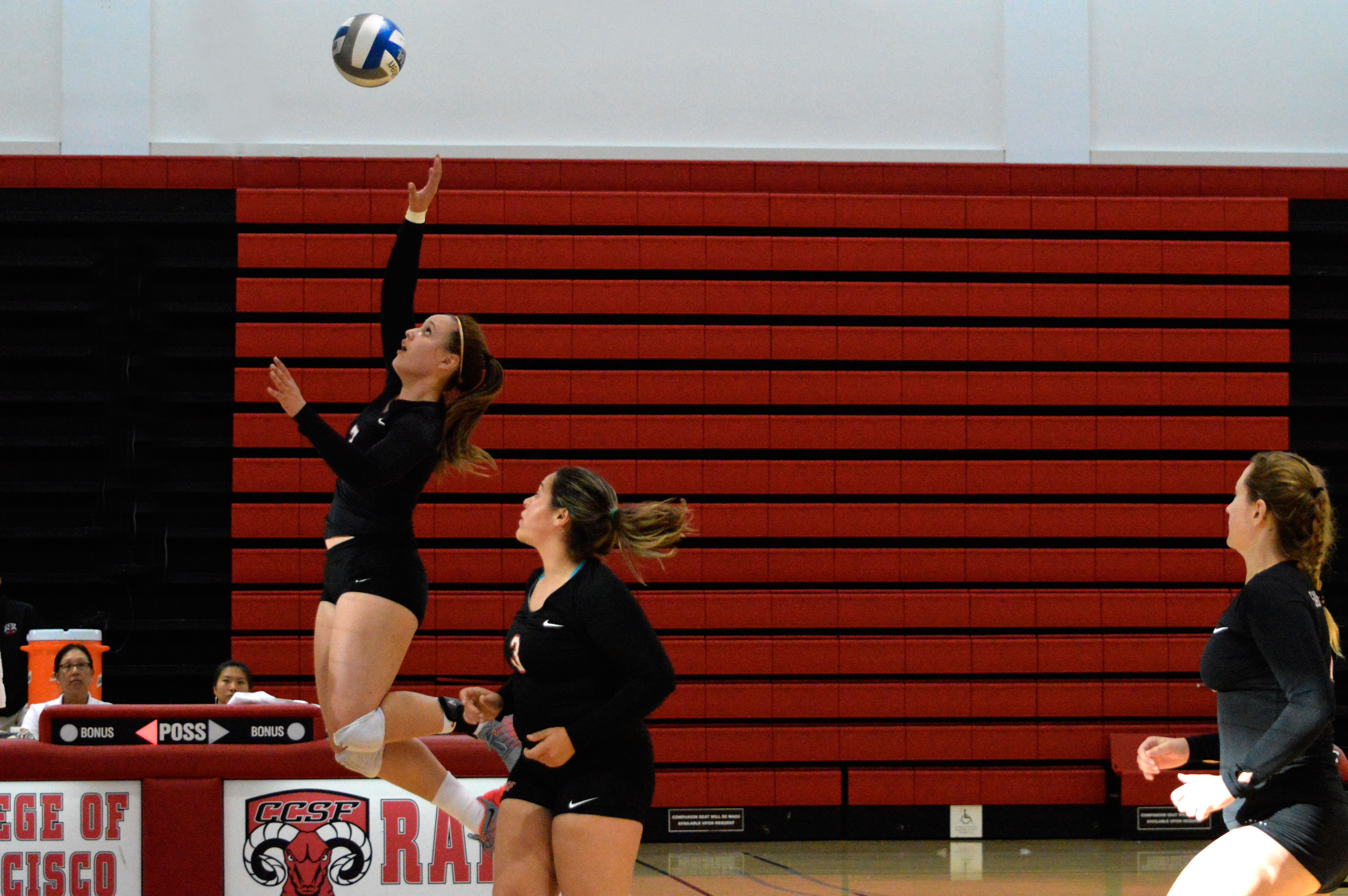 As the women of City College’s volleyball team were on the court warming up for their afternoon game against Feather River College Oct. 2, players from the opposing squad gathered in a stairwell to test both the acoustics of the Wellness Center and the power of positive thinking.

“I am a state champion,” the visiting team shouted over the pounding of their 17 pairs of feet pounding against the metal stairs, the thunderous noise spilling out into the corridors of the Wellness Center at City College.

It’s worth noting that the current state champions are Imperial Valley College.

With just eight players dressed for the game, the Rams lacked the numbers to make as much noise as their opponents off the court, but showed they could be just as loud on the court.

After the Golden Eagles scored first, Rams captain Sifa Faaiu led the response by earning her team’s first points of the game. But their efforts were not enough. The Rams lost the first set 22-25 due to the offensive strength of Feather River’s outside hitter Lexxey Southern.

The Rams used their physicality and offensive skill to come back from a slight disadvantage to tie and then dominate the majority of the second set, ultimately winning 25-21.

Bolstering the offense for the Rams was freshman outside hitter Kijana Best, who delivered kill after kill thanks to setups from sophomore co-captain Sierra Nelson.

But their success was short-lived.

Mental fatigue set in by the third and fourth sets, where small mistakes like double touches and miscommunications added up.

A blistering 10-25 loss in the third set sent the disheartened players reluctantly into the fourth, where the Golden Eagles sent unanswered serves whizzing past their heads.

At one point during the fourth set the Rams lead by three points, only to eventually lose the set 22-25.

Assistant coach Velvet Steel echoed her captain’s sentiments. Steel said the team’s loss didn’t have anything to do with physicality, but was instead “a mental or knowledge thing.”

“This is the first year in a long time that we match up really well with teams in the top ten in the state,” Steel said.

She went on to explain that the team is strong physically and just needs to bring their mental game up to the level of their physical game.

But the players and coach remain hopeful that the Rams will improve.

“It’s a learning process, and it’s still early in the game,” Steel said.

The Rams have an opportunity to enhance their performance on Oct. 13 when they take on division rivals Skyline College in San Bruno at 6:30 p.m.