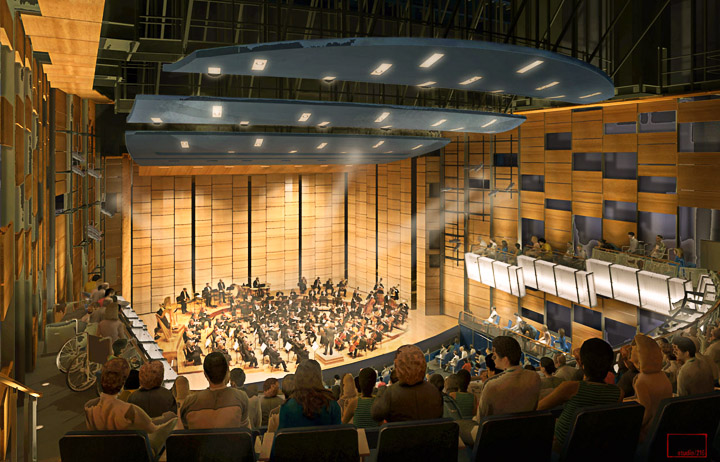 The plan to construct the City College Performing Arts Center is going to be put on hold indefinitely because a of shortage of funds.

The building was supposed to be completed in 2010 along with the Multi-Use Building, but it was pushed back when funding ran out.

For a campus with approximately 4,500 music and theater students, it lacks professional production equipment, practice rooms and has an incomplete auditorium.

The decision puts a hold on the school’s programs.

“We can’t expand the program into job training opportunities,” Board of Trustees President John Rizzo said. “The theater we have was always inadequate from the start. It’s old and it’s showing its age.”

The center would have allowed students to be trained in areas of live performance, stage production and lighting, skills that Rizzo said employers in the bay area are looking for.

The City College Music and Theater Departments have set up a petition asking the California State Legislature for a one-year extension on $38 million in state bond funding and calls for Agrella to reverse his decision.

The college already has $88 million available funds for the project, $50 million of which comes from bond funds and $38.1 million coming from state capital funds voted for by San Francisco taxpayers. However, the school is still short $5.5 million to $7.3 million.

Agrella said that the building’s annual operational costs are estimated to be $2 million, which includes the need for additional certificated and classified staff, and about $350,000 for utilities, maintenance and repairs.

“We already have classified people running that theater [Diego Rivera Theatre]. It’s not an additional expense. We have all the staff,” Music Department Chair Madeline Mueller said. “We’re moving across the street. The only new cost is custodians.”

She said that architects working on the Performing Arts Center can use “value-engineering” to remove features from the building to reduce building costs, so the additional $5 million in cost is “doable.”

Mueller said the $350,000 in utility costs should be much less than what Agrella presented.

“Part of the $20 million already spent on the [Performing Arts Center] involves the hundred plus geothermal wells dug under the reservoir parking area and the conversion rooms repositioned under the [Multi-Use Building],” Mueller wrote in a July 2013 letter to the school.

According to an article by GreenSource, the Multi-Use Building’s geothermal-based heating and cooling system is predicted to save 40 percent more energy than a typical new building and 70 percent more energy than older California community college facilities. Since the Multi-Use Building’s opening in August 2010, it has been only 6 percent short of its predicted goal.

The first five months of Multi-Use Building’s utility bills showed over 40 percent in reductions of its energy consumption compared to a building designed to code, according to Interface Engineering, the team that designed the ventilation system and a member of U.S. Green Building Council.

The Multi-Use Buildings’ hydronic system was designed to supply chilled and hot water for five additional buildings, according to a December 2011 article by ENR California. Had the center been built according to plan, it would have shared the same energy-saving hydronic system.

Using a hydronic system requires half the horsepower to circulate air, two-thirds less construction materials and one-fourth the total energy usage than a HVAC system, according to a study done by Taco, an industry leader in hydronic systems.

The center also has the potential to bring in $100,000 in revenue by renting it out to musicians, students, faculty, high schools and film festivals.

Where Will Money Go?

The $38.1 million of state capital funds will either go back to the state or another school if City College does not build the center.

“The $50 plus million now dedicated through the local bond criteria for the [Performing Arts Center] cannot be used for other CCSF projects, no matter how worthy, unless they were voted for already,” Mueller said. “It should be decided by the bond oversight committee.”

Agrella said he has already received approval to use the $50 million for renovation and repair projects on Ocean campus and its other centers.