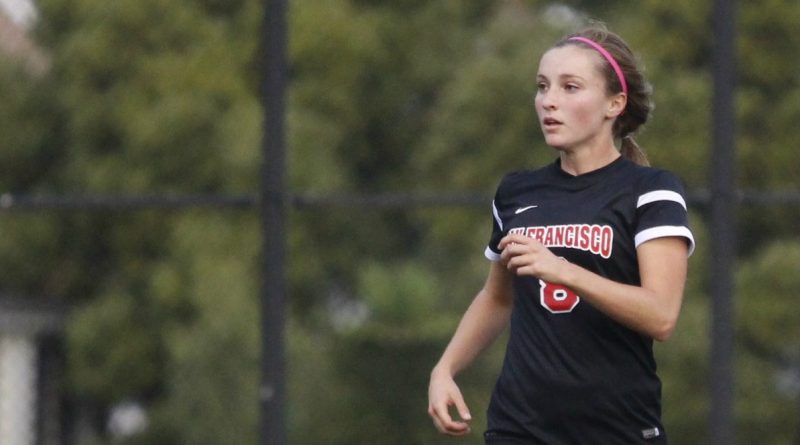 On a team with as much talent as the City College women’s soccer team, it can be hard for a player to stand out.

But sophomore forward Jesse Bareilles is setting herself apart from the rest of the pack with her incredible performance on the field and in the classroom.

In the first game under new head coach Jeff Wilson, the team had a preseason match against Skyline College.

The Rams outran and outwitted the Trojans for a 9-0 victory. Sydney Alvarado, Daniela Gutierrez, Jocelyn Alonso and Zoe Elloway scored one goal each in the match.

Bareilles scored five goals. And it wouldn’t be the last time she’d put five goals on the board in one game: she did it again in a 9-1 victory against De Anza College on Oct. 11.

Speaking to the unpretentious, easygoing Bareilles, you’d never know that she’s scored more than half of her team’s 45 goals in 14 games this season.

Her stats are impressive: third in the state in goals scored, leading the state in shots on goal, and fourth in total points. But if you ask her about it, she’ll quickly and humbly remind you it was a group effort.

“I couldn’t do it without my teammates. It’s them doing a lot of work and me doing the last step of it,” she said.

A star is born

Bareilles was born in Eureka, Ca. on Feb. 11, 1997 to Jack and Carolyn Bareilles, both educators in the public school system. They introduced their young daughter to soccer in part because of her father’s love for the sport, but Jesse quickly made the sport her own.

“I’ve been playing soccer since I was four, and I was always good at it,” Bareilles said. “When you’re young it’s hard for other kids to focus on what the point of it is, but I just always could get the ball in the goal. I definitely always liked it.”

Throughout her youth, Bareilles honed her skills by playing on a club team in Humboldt county. Bareilles’ father Jack coached, and for convenience her little sister Claire joined the team too.

Bareilles’ eight years spent with AC Samoa was a character and skill-building experience for the young player.

“My club team didn’t even have a full-size field to play on or practice on, so we never had home games and we just practiced in a basketball gym in the winter when it got too rainy,” Bareilles said.

The hardships made winning the 2015 Rogue Memorial Championship showcase, an annual youth soccer tournament in Medford, Ore. with 165 participating teams, even sweeter for Bareilles and her teammates.

Bareilles scored one goal in the championship match against the Rogue Timbers, and considers the tournament win one of her best soccer memories.

Part of the team’s success on the field was due to their lack of an actual full-size field that allowed them to focus on the more nuanced aspects of the game.

“We were really successful because we didn’t have good facilities, but we were really able to work on our skills and stuff, which helped us beat bigger clubs that had more infrastructure,” Bareilles said.

Bareilles calls herself an “unfocused” student in high school, which made it hard to decide on what college to attend. Luckily for City College, she chose to come to San Francisco.

Jesse Bareilles stands a little over five and a half feet tall. With her long hair and cool demeanor, she resembles a surfer more than a soccer player.

Cheerful, a natural leader, and humble to a fault, Bareilles’ success at City College has not gone unnoticed. Women’s athletic director Jamie Hayes is proud of her achievements.

“When I first met her last year as a freshman, she was very down-to-earth, very personable, just a sweet kid. But obviously watching her on the field, she’s amazing”, said Hayes.

Being at City College has also brought out the scholar in Bareilles, who is considering majoring in economics in order to pursue a career in international business. She’s gone from a C+ grade point average in high school to a 4.0.

“All-American last year as a soccer player and All-Academic this year, I mean she really knows how to balance being a full-time athlete and being a full-time student,” Hayes said. “She’s kinda the epitome of a student athlete and excelling in both, so it’s really nice to see just the balance of that.”

“I think her best quality is just how competitive she is with herself,” Wilson said. “She’s always willing to make herself better and I think that’s why she’s been able to find so much success over the last couple of years. I kind of equate that to where she’s from, kind of a smaller-town mentality where she’s just out to prove that she’s as good as anybody.”

Even Bareilles acknowledged that the hardest thing to overcome has been herself. She even considered giving up the sport.

“I used to have a hard time if I wasn’t succeeding easily in sports, so I debated giving up soccer multiple times,” Bareilles said. “I think that I was my biggest opponent at times.”

Now in her last year at City College, Bareilles looks forward to where soccer will take her. She’s open to attending any school with a good soccer and economics program, and hopes to start an internship in the spring when she isn’t as busy with soccer.

For now, she’s a part-time dog walker, full-time student and scholar athlete. She makes it all seem easy.

“I don’t doubt anything that she can do, she’s going to be able to excel at pretty much anything she puts her mind to. She’s a great student athlete here and it’s been fun just being able to watch her,” Hayes said. “I’m actually really excited to see where she’s gonna move on to and how she’ll do. Like I want to be able to fast-forward and just see.”