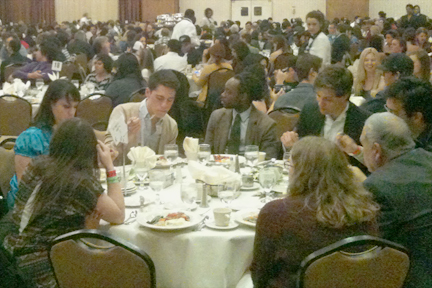 By The Guardsman Staff

“I am deeply moved by the award,” Gonzales said. “I never expected such an honor.”

“I feel that the level of professionalism displayed by The Guardsman’s staff is unmatched,” Editor-in-chief Alex Emslie said in a prepared statement. “This sort of recognition is nice, but we don’t do this work to win awards. We do it because we believe it is important to inform our community.”

“Our students work extremely hard to produce a consistently excellent publication,” Etc. Magazine adviser Tom Graham said. “The stories they produce are good enough to run in any magazine.”

Because The Guardsman Online pays to be independently hosted, the publication is able to maintain a certain level of independence and creativity, Online Editor Atticus Morris said.

Multimedia Editor Joe Fitzgerald and reporters Saidy Lauer and Brian Rinker produced a feature on journalism students pursuing their dreams at the conference that is currently displayed on the JACC homepage as well as at TheGuardsman.com/Journalism-Dreams.

“I feel really proud of the work that my crew put in to make that happen,” Fitzgerald said. “This wouldn’t be possible without having a crew that covers stories professionally. My crew made the decision that they weren’t going to be journalism students. They were going to be journalists.”

“What I like about The Guardsman is the family environment, how we all sort of pull together,” Ladra said. “We hold ourselves to a very high standard.”