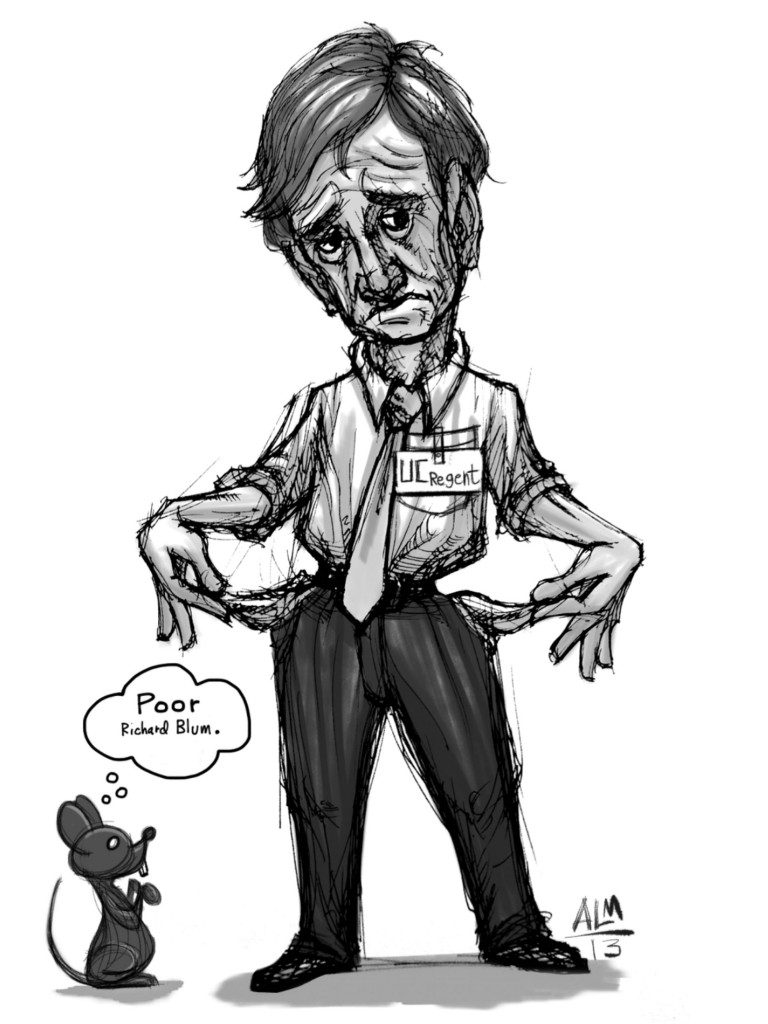 Funding for California Community Colleges has been cut by $809 million, or 12 percent, since 2008-09, according to the Chancellor’s office.

Last month, Gov. Jerry Brown announced his proposed budget for the fiscal year 2013, which included $197 million in additional funding for the state’s community colleges, as well as $125 million each for the University of California and for California State University. Things were looking up. Or so we thought.

Apparently those funds are not enough.

Brown recently visited the UC Regents and insisted that the governing body tighten its belts regarding administrative salaries and faculty benefits. The Daily Californian reported that one Regent got defensive.

Richard C. Blum complained that UC administrators are already paid well below their counterparts at private universities. Tightening his belt was certainly out of the question. He said pay increases are necessary to retain the highest quality employees, the Californian reported.

Then he went on the offensive.

Continually underpaying administrators at the university, he said, would “only result in the UC becoming a junior college.”

Blum is affluent and well-connected. He is an investment banker and husband to Sen. Dianne Feinstein. His net worth is unknown (his wife’s is estimated to be around $70 million), but it’s safe to say he is not applicable for CalFresh food stamps.

Schools like City College not only provide a high quality education—at an affordable price, mind you—but administrators in the system are often well compensated.

City College’s Interim-Chancellor Thelma Scott-Skillman makes a base salary of $276,000. On top of that, the San Francisco Chronicle reports that she also pulls in two separate pensions from previous careers in public education which total $169,117 annually.

That brings her total annual salary to $445,117—nearly half a million dollars.

Sir, know your facts before making such an outrageous statement. California public education, particularly the community college system, is under attack from all angles. Don’t add to that with your offensive and unresearched comments. Community colleges deliver education to middle and low income students. Many bright, eager people would be unable to engage in higher education without these institutions.

Here are some facts to chew on:

Transfer students from the California community colleges to the University of California system currently account for 48 percent of UC bachelor’s degrees in science, technology, engineering and mathematics.

Community colleges offer associate degrees and short-term job training certificates in more than 175 fields, and approximately 25,000 apprentices are educated each year to meet the demand for a skilled workforce.

Nearly 50 percent of all California veterans receiving GI educational benefits attend a California community college for workforce training, to earn an associate degree or to work toward transferring to a four-year university.

Mr. Blum, you owe City College, and each of the over 100 California Community colleges, a personal apology.