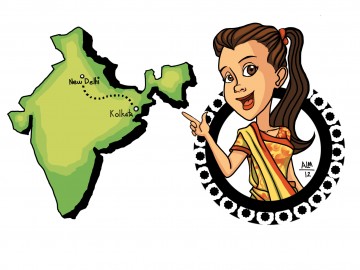 I became homesick on my sixth day. I missed my city, my friends, home-cooking, and fresh air. But then I landed in Kolkata, and I was home.

Previously known as Calcutta and nicknamed The City of Joy, Kolkata was the British capital from 1600-1947.

The massive European mansions that lie between the shanty towns are a constant reminder of colonization.

But Kolkata has since created its own charm, with no shortage of rich Indian culture and statues commemorating Indian independence heroes.

The charm of West Bengal’s capital state is tempting me to call off the rest of my trip—and stay for the remainder of my time. Or forever.

Fresh street-food cooking around every corner; friendly and helpful locals; the smell of fresh Chai in the air, and a diverse mixture of travelers and lifetime Kolkata dwellers have completely eradicated my desire to return to San Francisco.

Everywhere I go there is a friendly face, whether they’re willing to give directions (only sometimes expecting compensation) or engage in a philosophical conversation, there is no shortage of quirky characters.

I met a Hindu who wears a crucifix necklace and a Christian who wears a bindi. I held a naked baby who was born and raised on the street—I’ve never seen a happier child in my life. I made a vegetarian dinner with four people from four different religious backgrounds.

I enjoyed lassi with a Brahman (highest in the caste system) and her Harijan (much lower in the caste system) husband—they ran away to get married against their parents’ will. I met a visibly happy couple from an arranged marriage, and a ‘love-marriage’ couple in the process of a messy divorce.

I’ve been ripped off by a rich man and had my wallet returned by a beggar—no cash missing.

Not to mention I fell in love.

Well, the kind of love that nomads fall into—it’s only temporary. 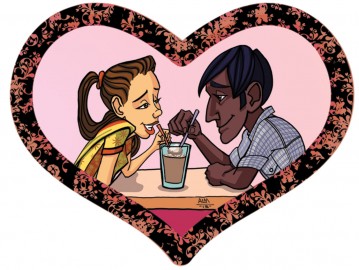 His name, Sonu, means sun in Hindi, and he’s equally bright and beautiful. He is a Chai Wallah, like the main character in Slumdog Millionaire.

He caught my eye from the moment I saw him working in his tea shop. His raspy voice and wide brown eyes have an irresistible charm, and his shining smile left me no choice but to order a tea, even though I’d just finished one around the corner.

We’ve been inseparable ever since.

I’ve spent hours sitting in his shop with my guitar, singing for customers and enjoying the good company. We roam the city together, hand in hand. He takes me to all the Kolkata gems, like a hidden lassi shop down an alley. I would have never known it was there, and the lassi is to die for.

I’m enjoying every second I spend with him, but in the back of my head I know I will never see him again once I leave. He knows, too. We’ve silently decided to enjoy it while it lasts and be okay with it when it ends. But that’s not to say I won’t shed a tear when my train departs. Or come back to marry him one day.

I decided to stay in Kolkata a week longer so I can celebrate my birthday with all the wonderful people I’ve met. I was expecting to spend it alone, but India is treating me well, and I already have good company to enjoy my 22nd birthday with.

My next stop is the orphanage. A 35 hour train ride will bring a drastic change of scenery. I have no idea what to expect, except for complete surprise.